Long ago in a remote logging camp in Southeast Alaska the boss decided that he needed a boat trailer for one of the boom boats. Boom boats are not very long, but they are deep and heavy. The trailer would have to be stout. It would have a long tongue so that they could back the boat deep enough into the water to float the boat off off the trailer. The boss decided that Henry was up to the job. 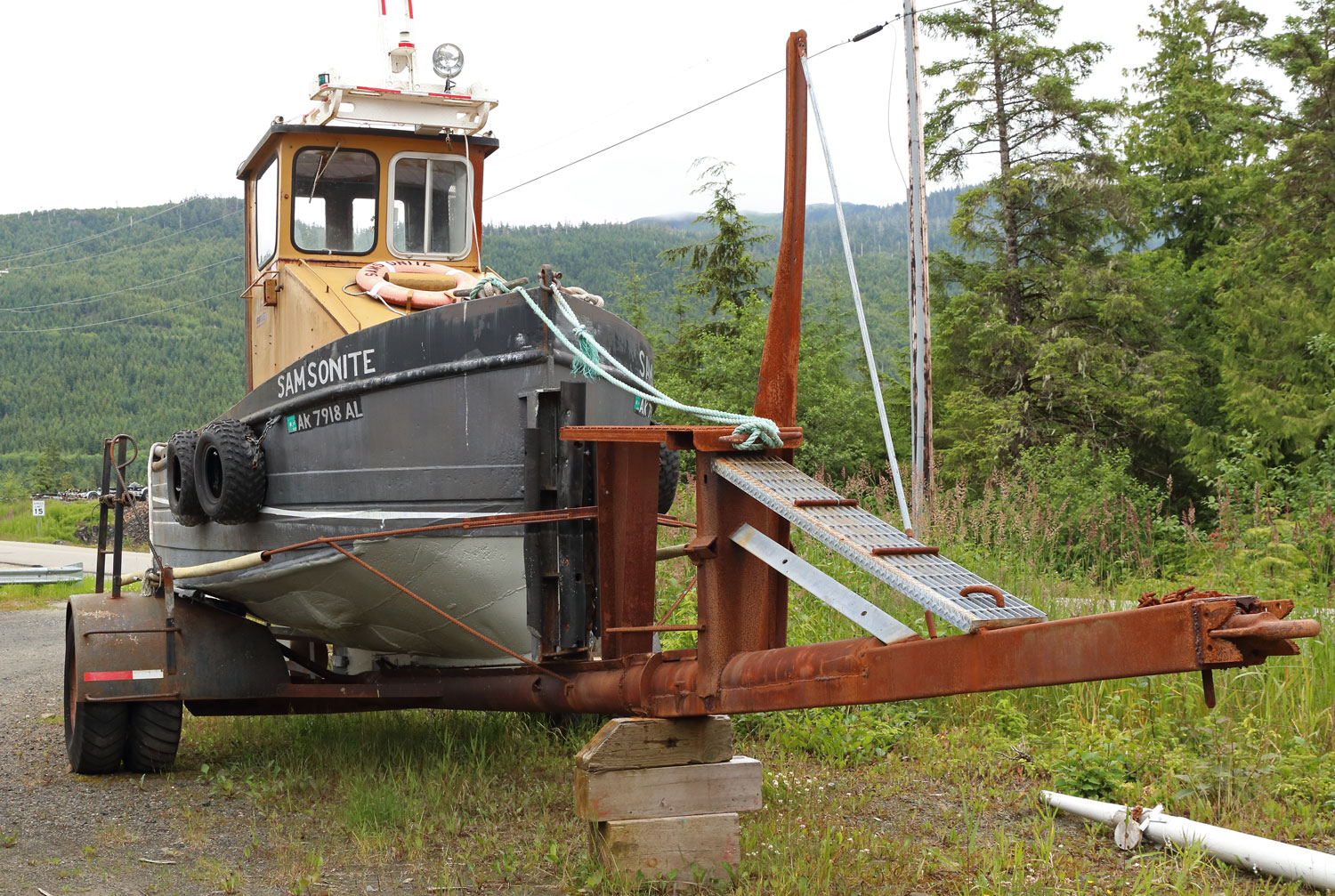 "Henry! Samsonite needs a boat trailer. We're going to tow it overland to the other side of the island the morning after next. And don't go robbing anything off of working equipment!!"

Henry nodded, collected up his lunch off of the spike table, went out to the equipment boneyard, and set to work. He gathered up a bunch of rebar from here and there and pulled some flat bar stock and angle out of the scrap barrel. Then he put his leathers on and went to work with his cutting torch.

Henry took a back axle off of a log truck that the greenhorn had wrecked when he hotdogged down the mountain and missed a corner. Then Henry cut the reach (tongue) off of the truck, welded that onto a pipe from an old log tower, and welded that onto the axle.

Now loggers were always losing the dang pin for the pintle ring, so Henry found a broken log chain over by the pile of shackles. He welded the chain onto the top of the pin and welded the hook onto the tongue. Let them try to lose that. 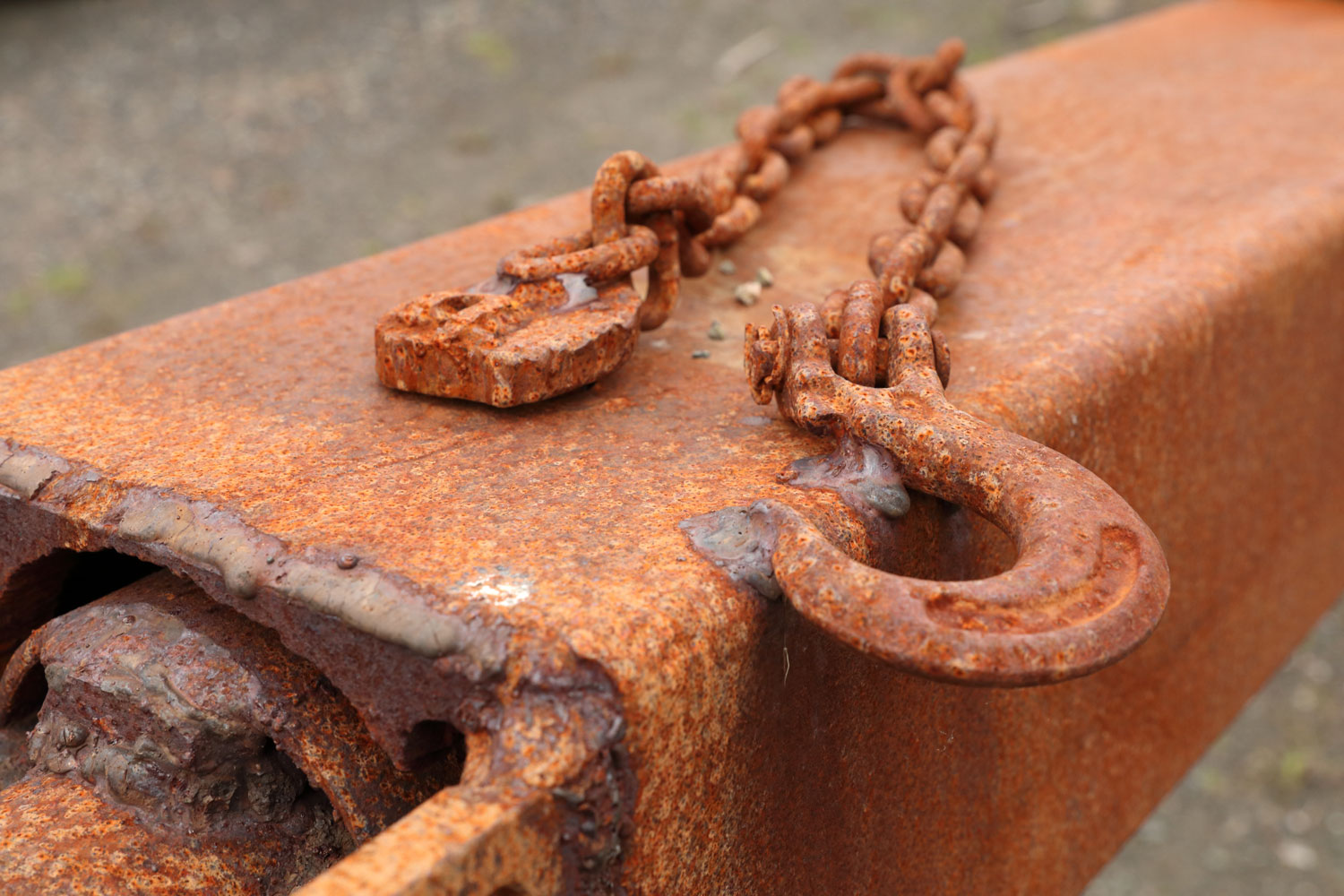 Boom boat operators push big, heavy logs around for a living. Henry needed something hell-for-stout to stop the boat when the operator runs it up onto the trailer. He fired up the Cat 980 log loader and used the tine to dig around in a pile of metal that had been building up for a few years. There was that little platform built out of old metal shop building beams. Henry flipped it over with the 980, and then cut out a chunk of tapered i-beam. In that pile he also found some walkway grate and other treasures.

Things were coming together pretty well by midday, so Henry pulled two sandwiches out of his lunch bucket and washed them down with a thermos of coffee. Then he fired up his welder and went to it.

Now Henry figured that he could pretty well fab the trailer with chunks and scraps, but the fenders were niggling him. Plate steel was just too darn heavy and precious to use up on that. It sure would be nice if you could step up onto the boom boat from the sides, too. He tucked that thought away while he pulled the hinge pins out of the ventilation doors from an old generator shed. Those would be great bunks for the boat to sit on. There were a few leftover scraps of dock bumper to pad the bunks, so Henry quickly procured them. 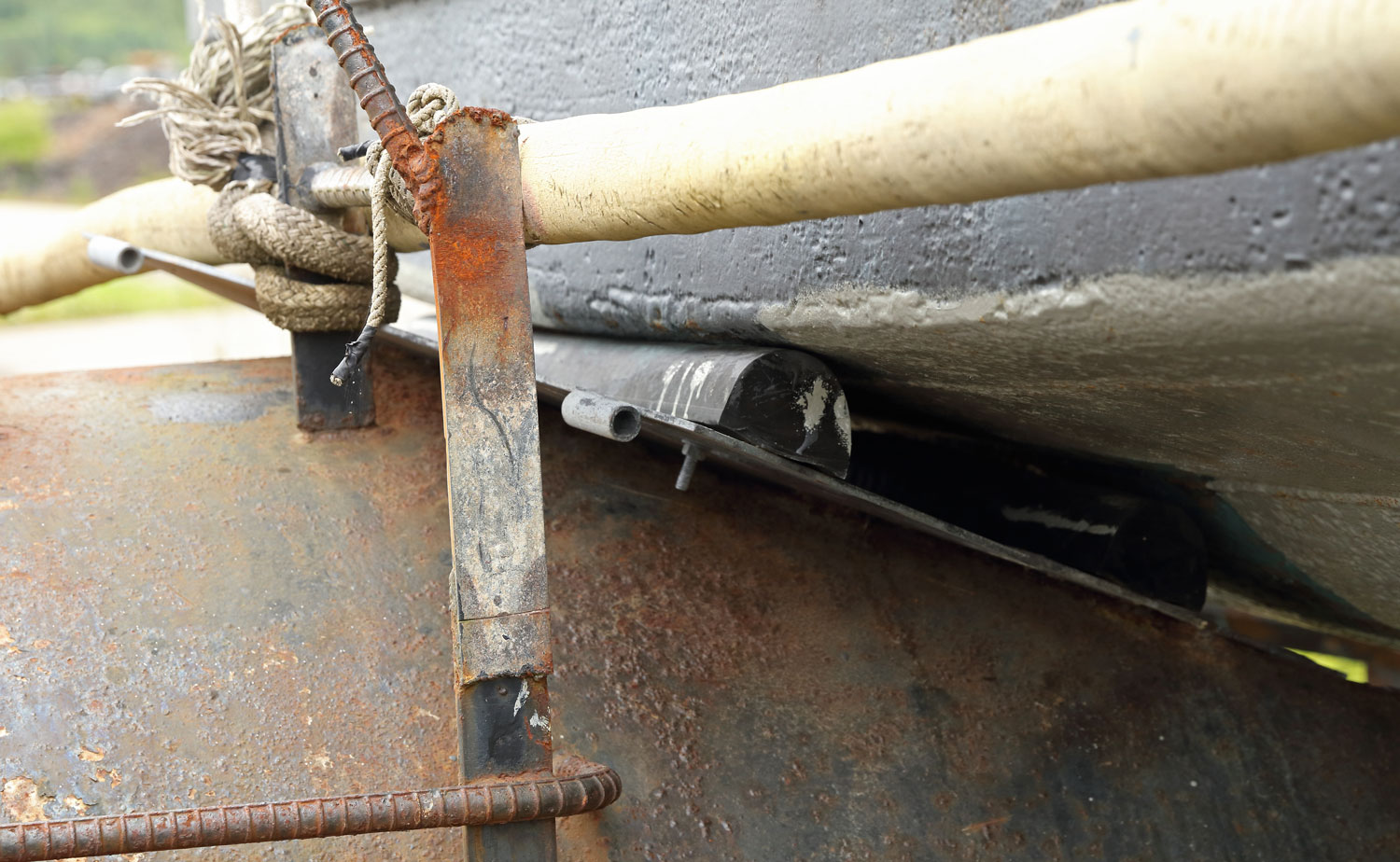 As Henry walked past the cookshack with the dock bumpers casually wrapped in a blue tarp, he noticed the tank for the oil stove. It reminded him of the 500 gallon fuel tank that was left over when they changed the generator out. Perfect for fenders! 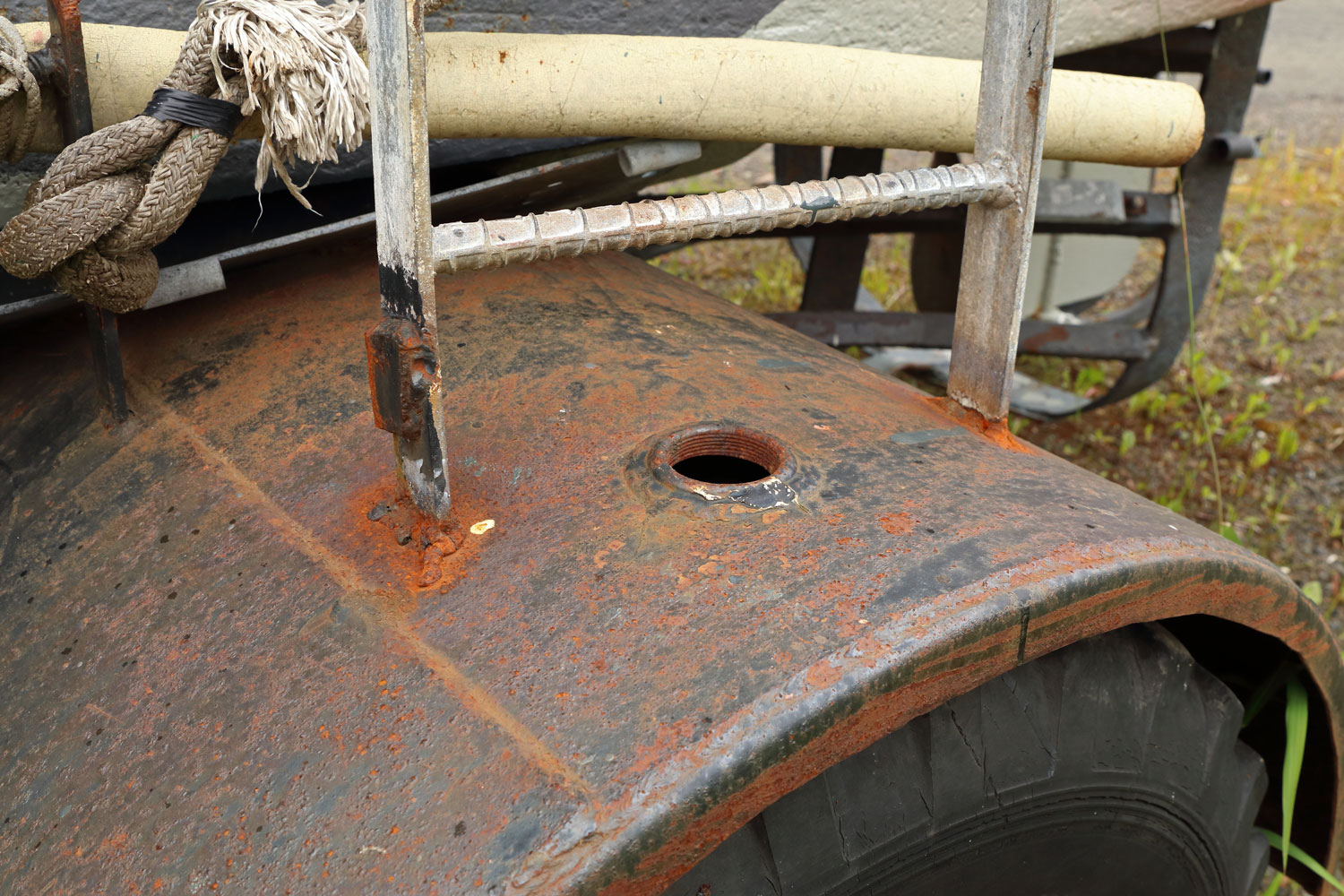 Henry cut the tank in half and cut the angles to lay the bunks on. He spent the afternoon welding and cutting and welding some more. Another day and things should be in pretty good shape. 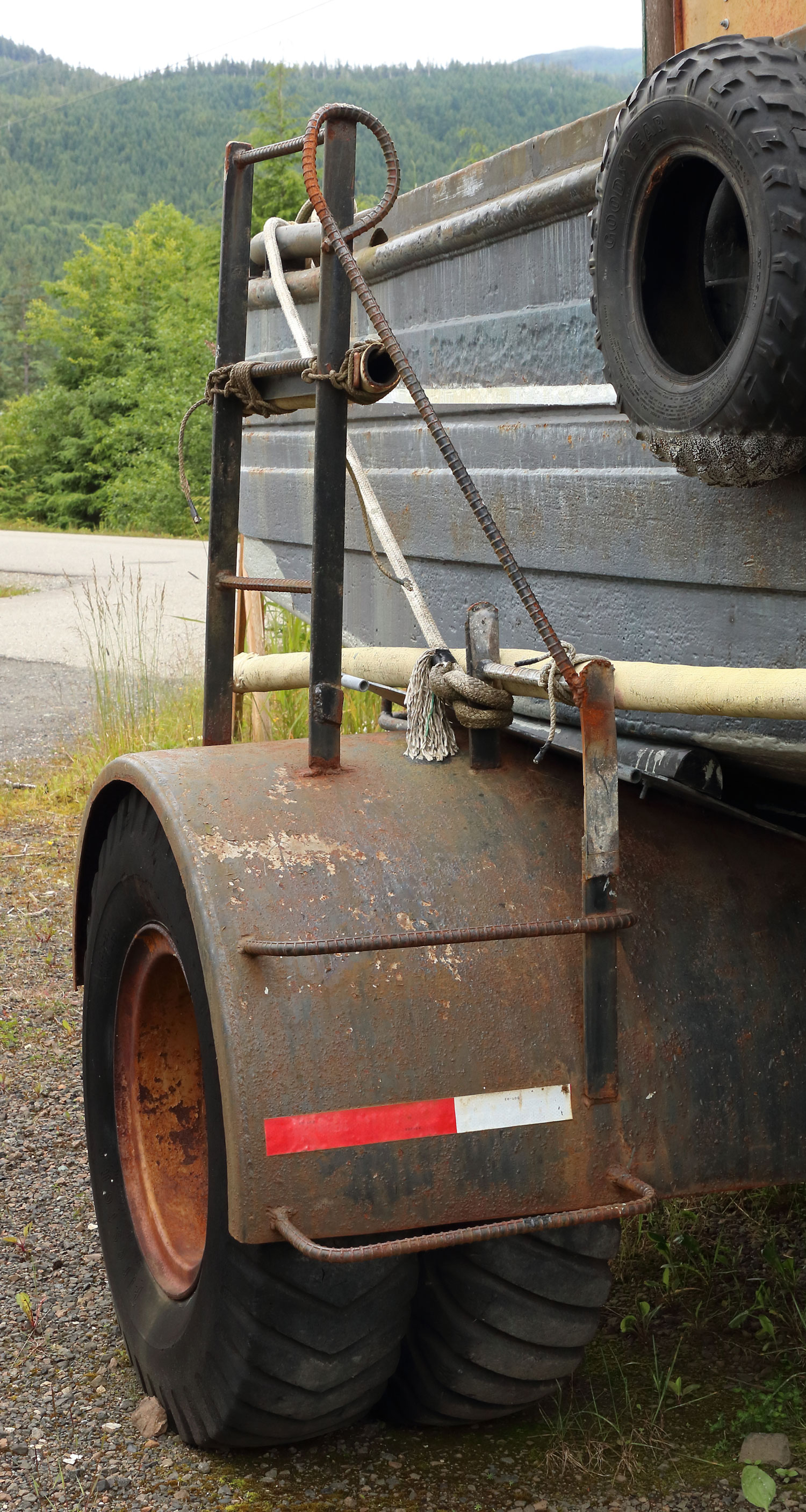 At dinner the boss came over to Henry with a scowl. "Henry," he said, "we need that boom boat on the other side tomorrow night. They'll be pulling it out no later than ten tomorrow morning."

Henry finished his meal and went back to work. He made ladders out of scraps of bar stock and rebar. He made rails and reinforcements with angle iron and rebar. He pulled out his blacksmith hat and bent rebar to make a railing.

It was getting somewhat late, or judging by the light to the east, a little early, when Henry realized that it would be best if there were a few safety features. He added rebar cleats to the walkway, but the walkway needed a railing, too. Henry was tired enough to be past "pretty" and "nice", so he grabbed a wicked looking piece of scrap metal and a length of conduit. He welded the scrap onto the trailer and then smashed the end of the conduit flat and bolted it to the scrap iron at the top. There just wasn't an elegant way to attach the conduit to the walkway, so he blew a hole in the conduit with a torch, welded a bolt in, and welded the bolt to the walkway. 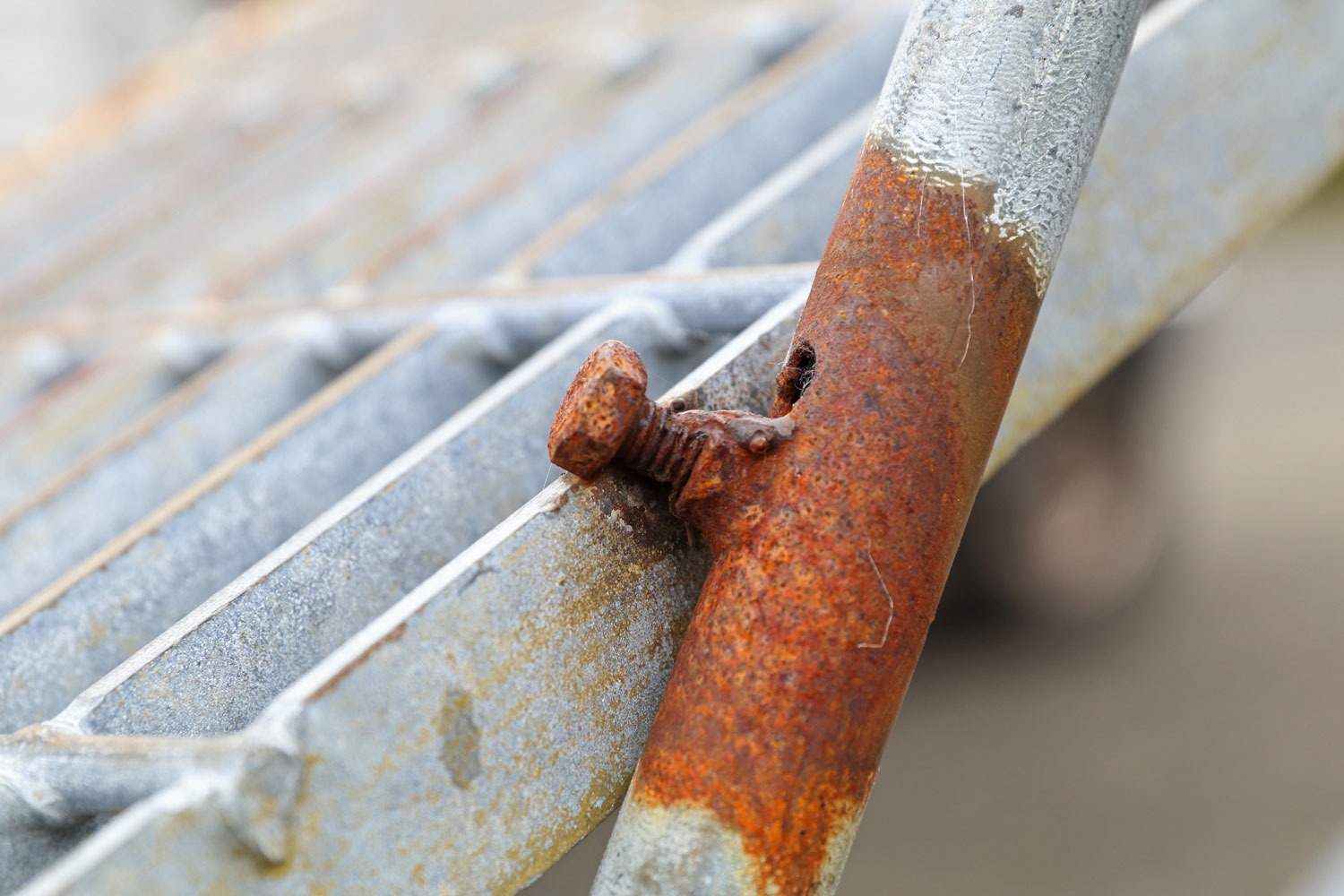 Henry knew that the boom boat wouldn't always come onto the trailer perfectly straight, so he added some exhaust hose as a bumper. He scrounged up some rope and attached the hose to the metal. 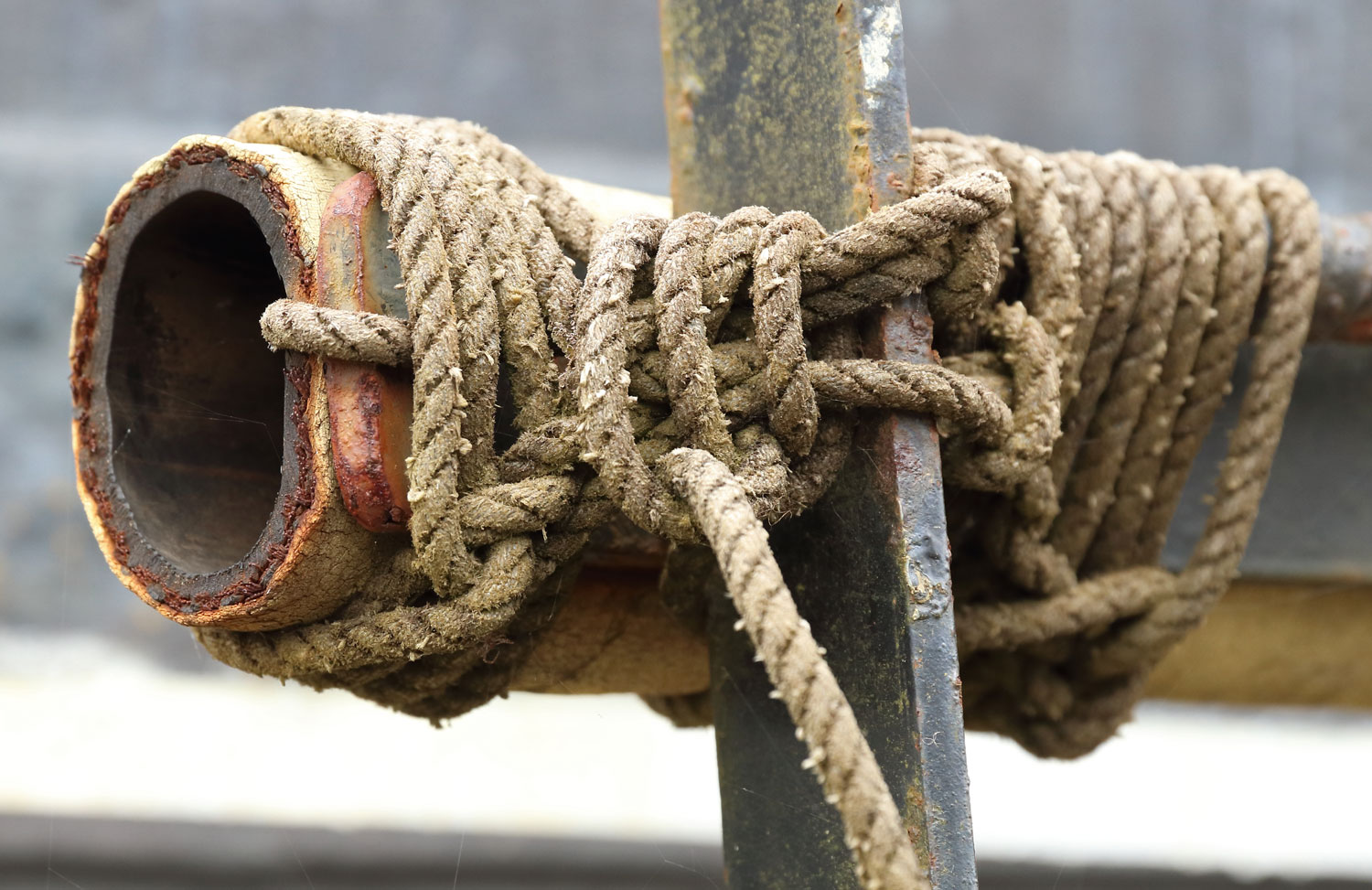 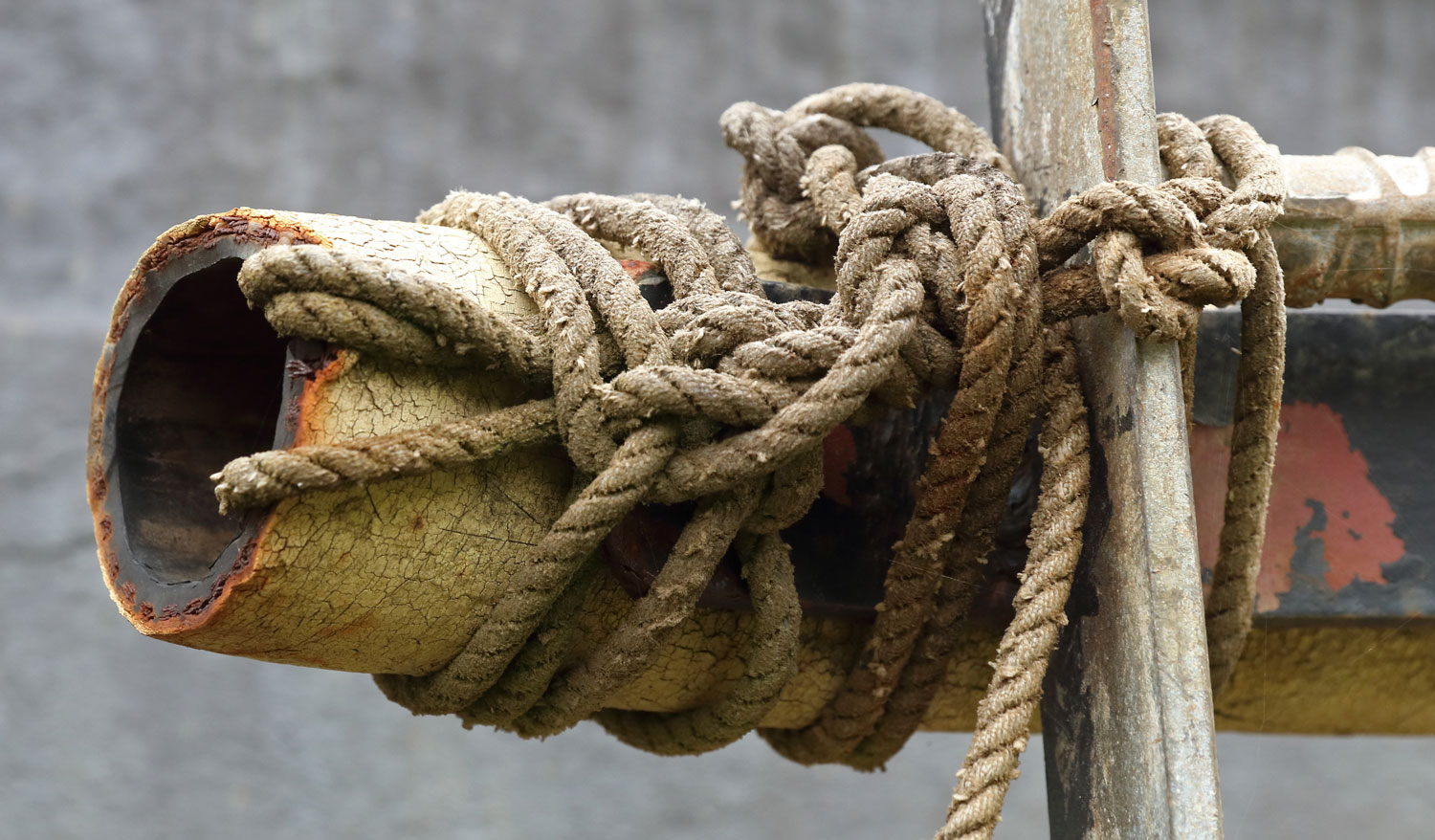 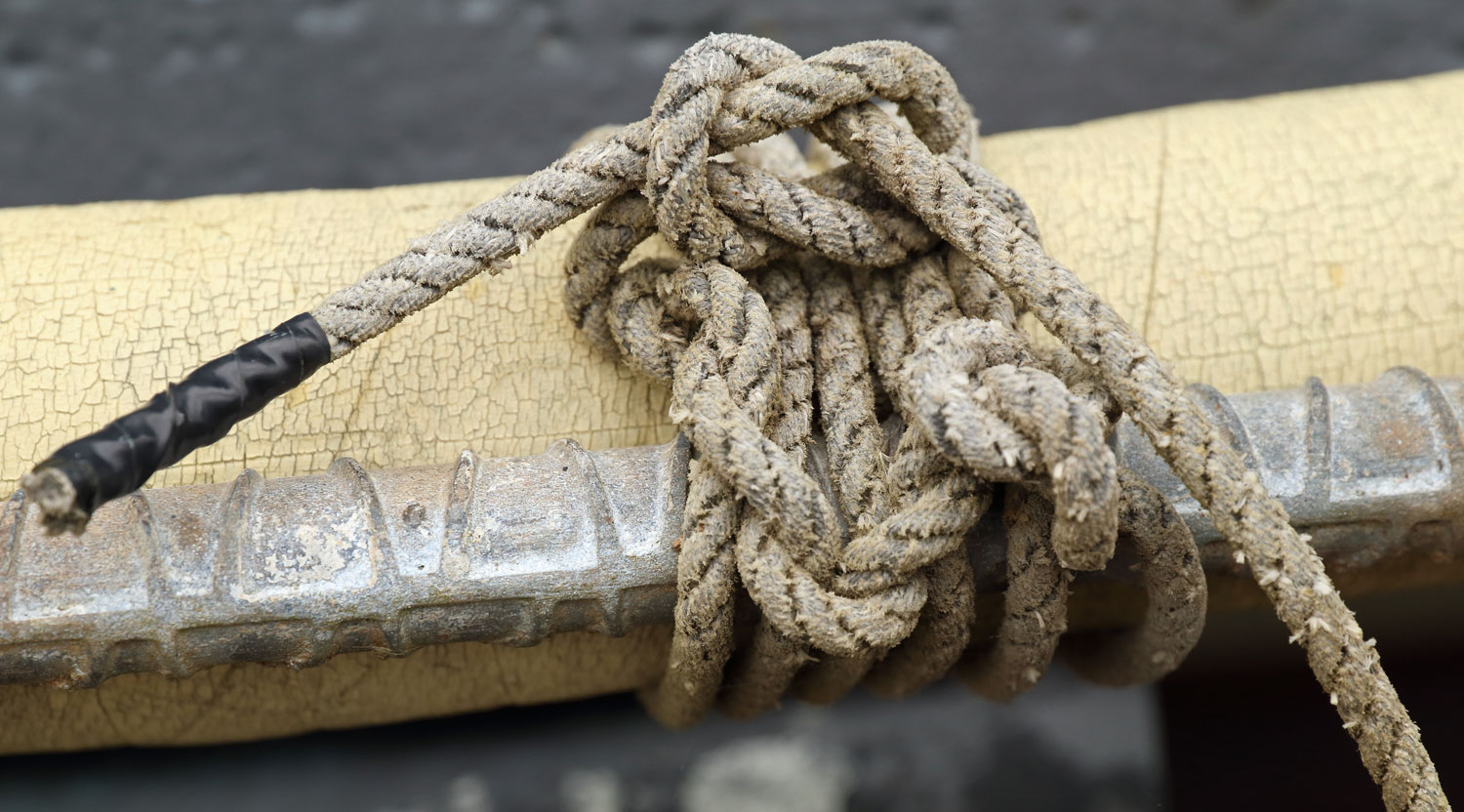 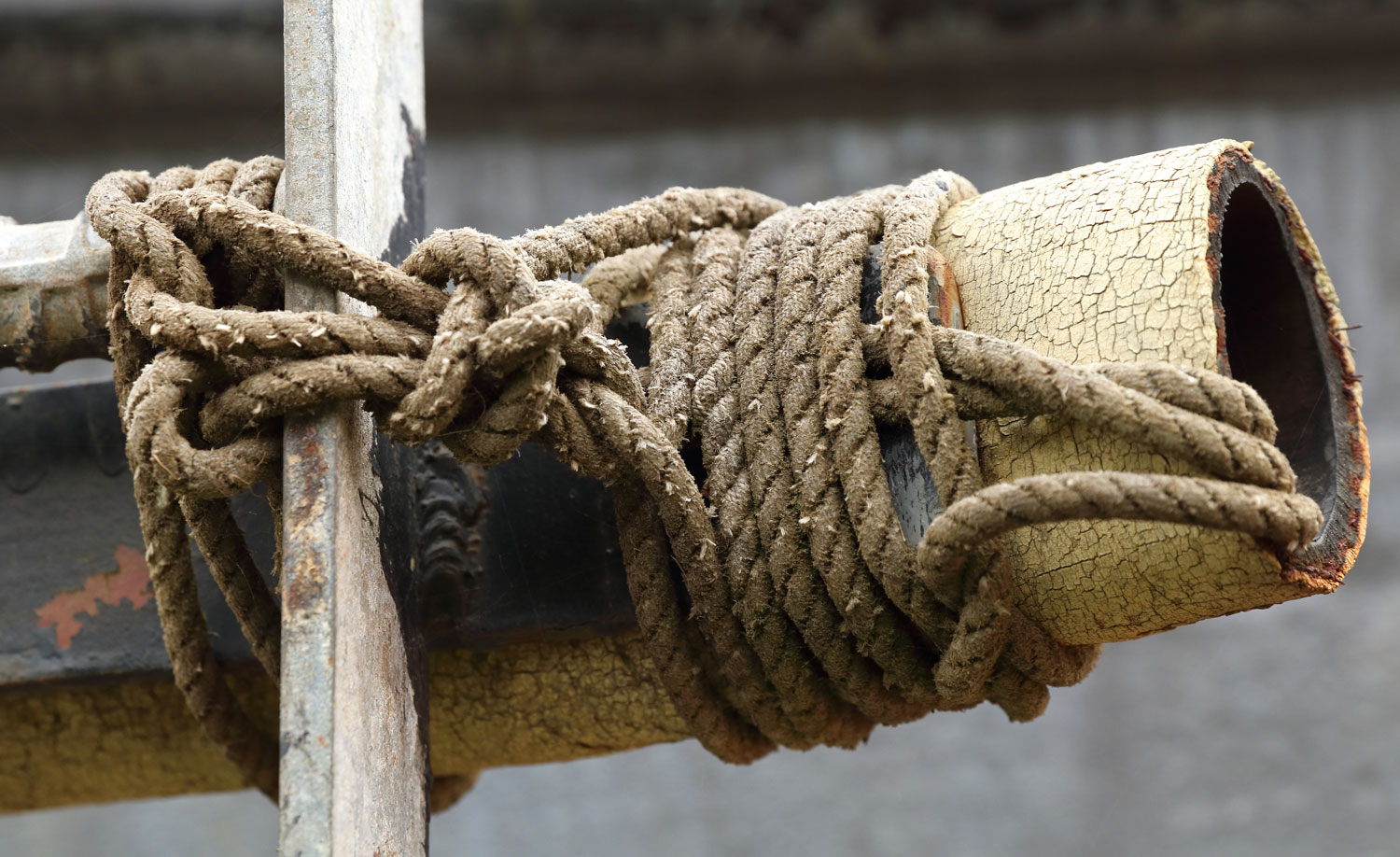 He contemplated his prowess with rope and decided to stick with his torch and welder. A few finishing touches and Henry was done.

The boss stopped by before breakfast. "Damn, Henry! That's a work of art! But what's with the shiny red and white stickers?"

*Disclaimer* I made this whole story up. Henry only exists as the men who made do with what was available during the logging camp era in Southeast Alaska. My hat is off to the person who fabbed up this boat trailer with inspiration, improvisation, and perspiration.

Take the scraps of your day and make something that works!

P.S. I know that the last two posts have been whimsical. I'll get serious in the next post or so. Don't give up! I haven't lost my grip on reality entirely yet.

Second Growth; On the Bones of the Elders

Boom boat: A small powerful boat that is used to push logs, log bundles, boom sticks, and other wood around in the water.

Boom sticks: The logs that are chained together to contain the log raft.

Spike table: A table with lunch items. The loggers pack their lunch off of the spike table in the morning.

Pintle ring: What the pintle hitch attaches to.

Cat 980 log loader: Like the 988 below, only a little bit smaller. Don't be fooled by the delicate work this loader is doing. It can grab a whole load off of a truck. 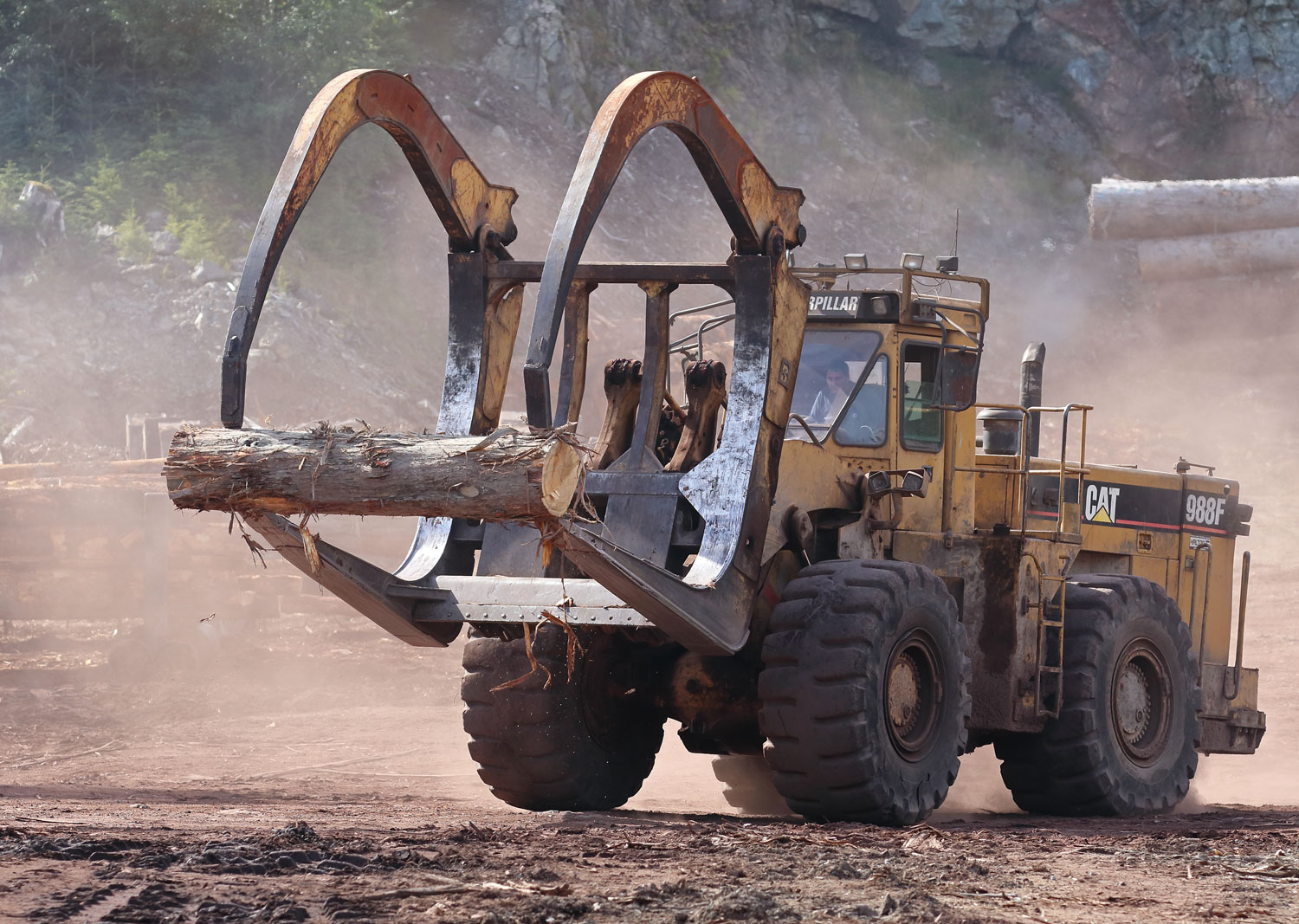