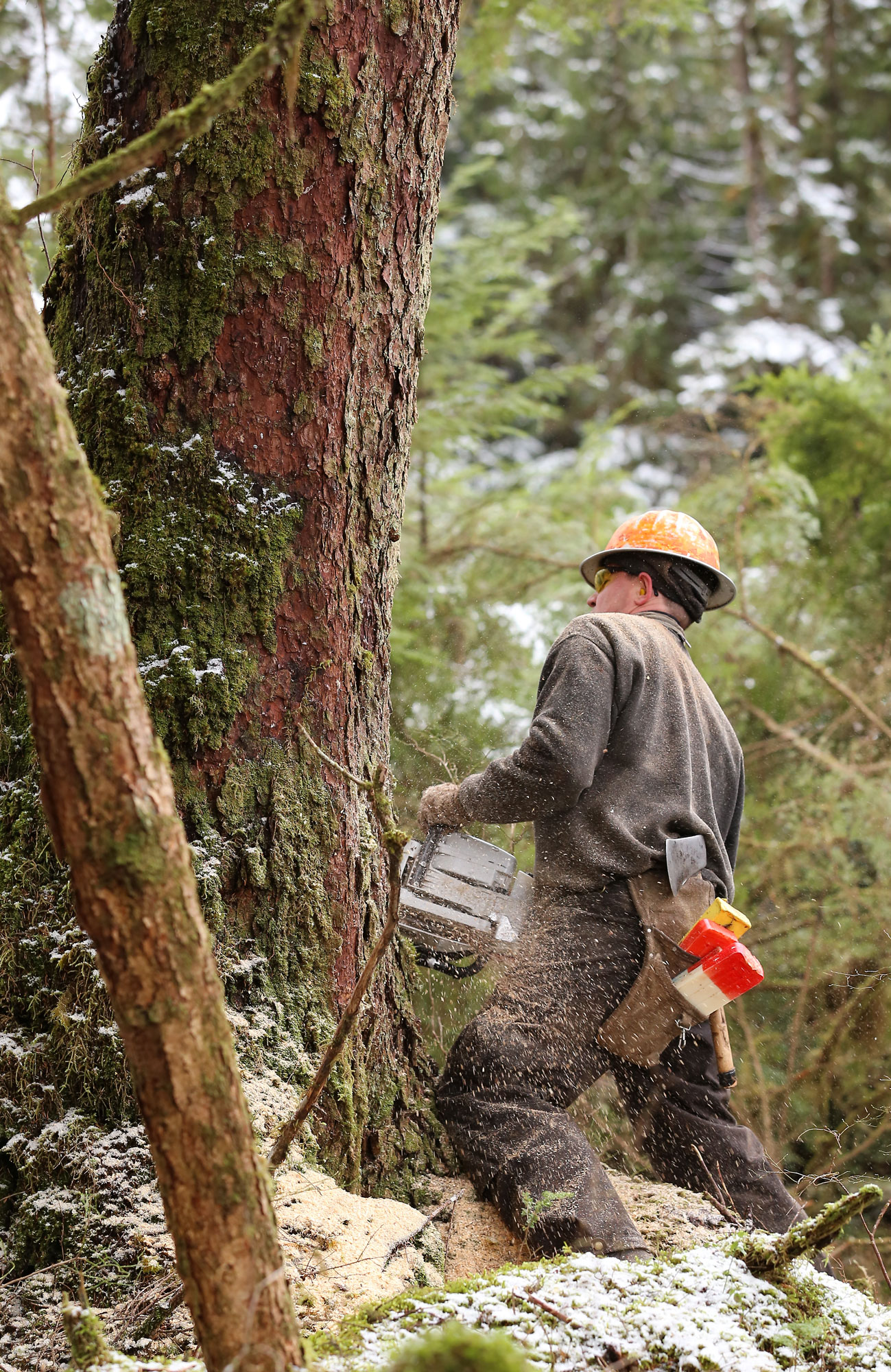 This post shows you a logger cutting trees and talks about his work, but there is some background to cover first.

The Alaska Mental Health Trust Authority is doing some logging near Wrangell. This may seem incongruous, so I'll go into some explanation.  Alaska set up the Mental Health Trust Authority as a corporation to administer a perpetual trust to benefit those who experience mental illness, developmental disabilities, chronic alcoholism, and Alzheimer's disease and related dementia in Alaska. Alaska formed the trust in 1956, three years before statehood, giving the Trust one million acres of prime land to manage in order to generate income for Alaska's mental health programs. 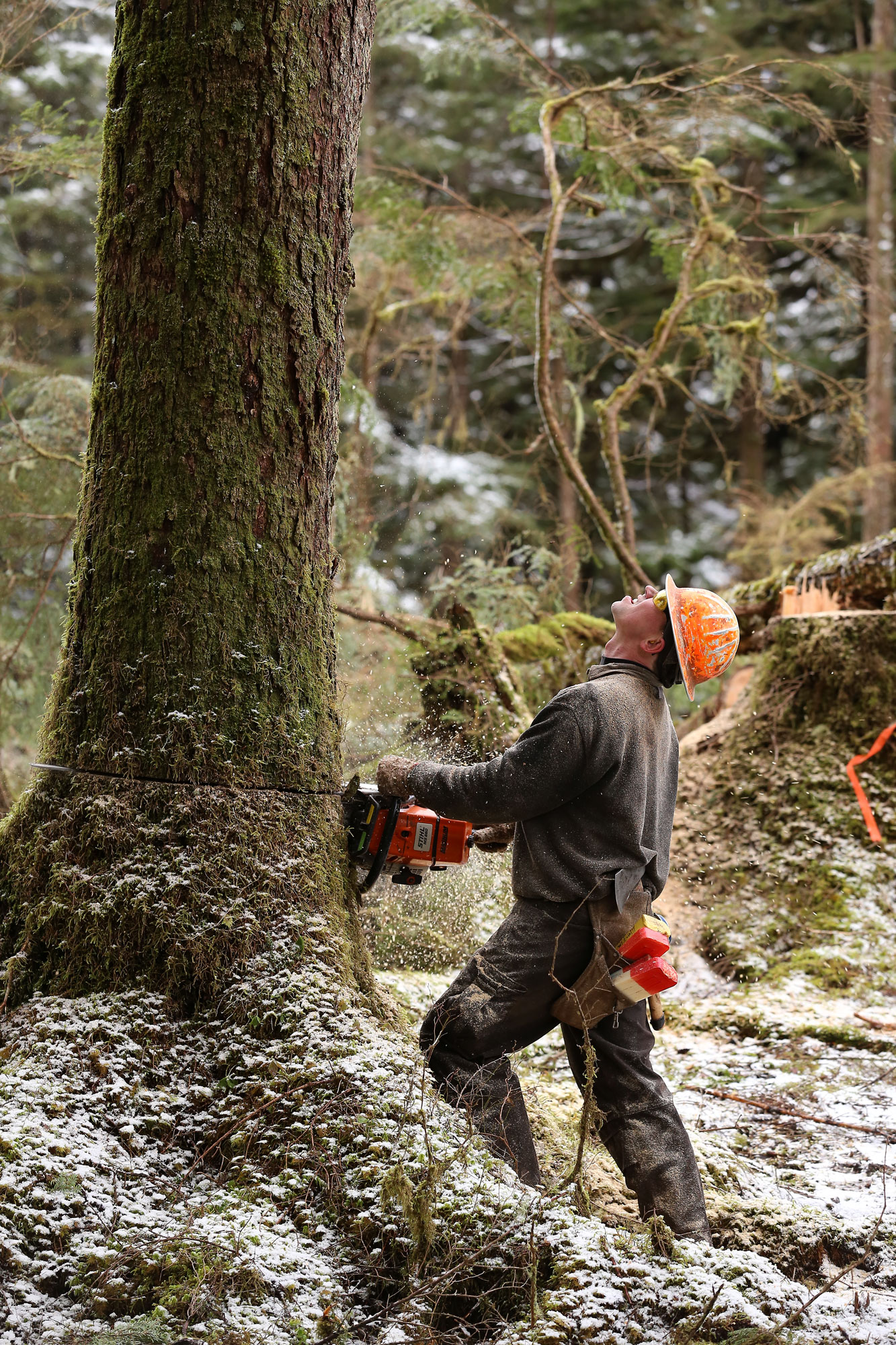 Jeremy sighting the tree as he makes the back cut.

Things didn't go quite like they were supposed to for a few decades. By 1982 65% of the land had been transferred into private or municipality ownership, or designated as forest, parks, or wildlife areas. A lawsuit was brought against the state that year, resulting in the State of Alaska rebuilding the Mental Health Trust by 1994, giving the Trust more land (500,000 more premium acres), $200 million in cash, a board of trustees, and more rules and oversight.

Commercial timber sales are part of the income that the Mental Health Trust Authority generates to fund it's programs in Alaska, and that is why Jeremy is cutting down that tree in the photo. As a part of the mandate to maximize income from it's resources, the Trust takes the timber off of some of their land and sells it, primarily to the export market.

Okay, now you know why the trees are being cut down. On to Jeremy, a logger from Washington state, who is putting some of the timber on the ground. Jeremy is a professional faller and has been working in the timber industry for twelve years. He is a very easy-going guy, and gave us permission to photograph him working. 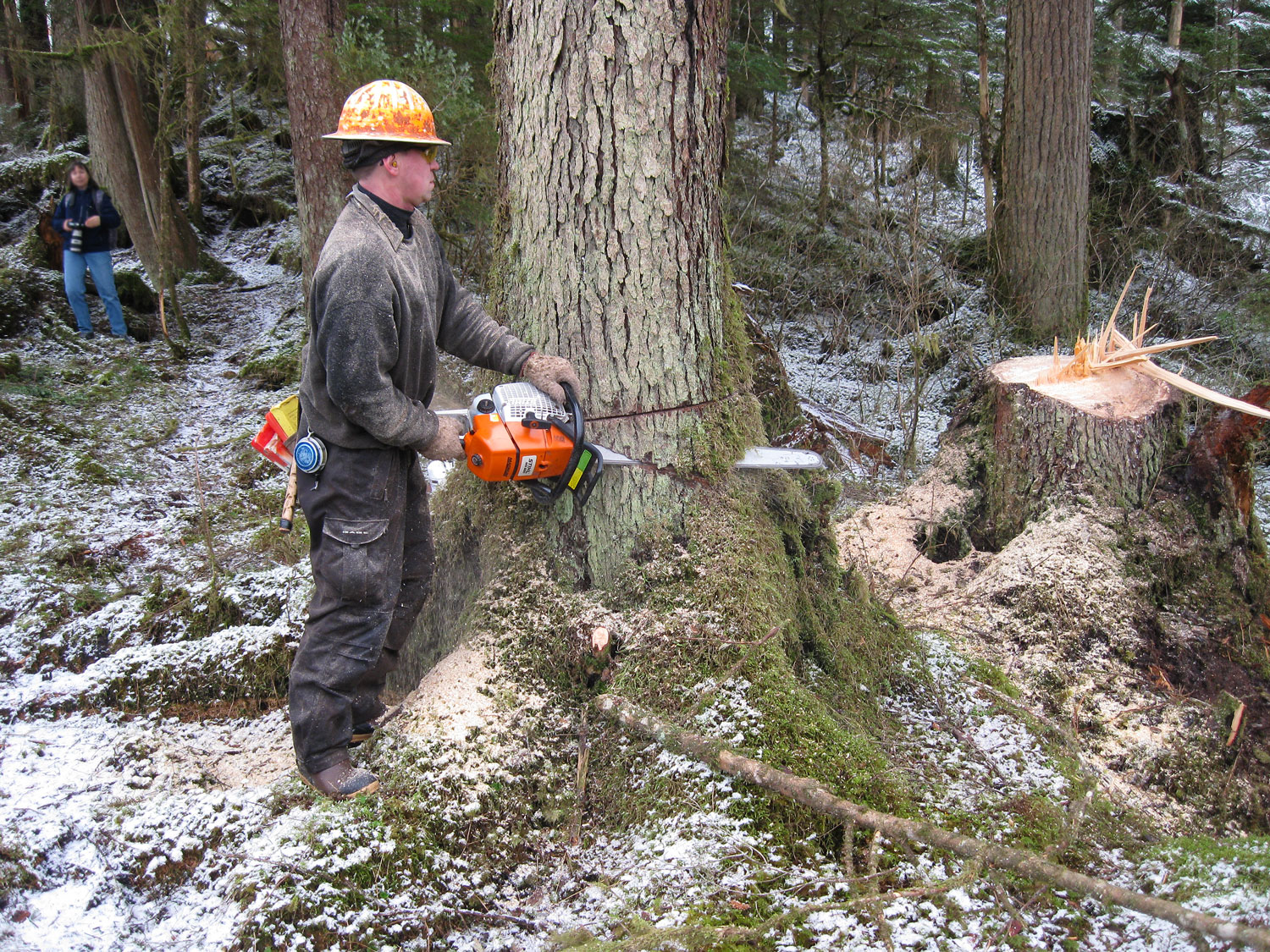 Jeremy making the bottom cut to take out the notch. This photo was taken by my husband, and I am in the background ready to take photos, and go hide behind a tree.

The type of cut that Jeremy is making is a Humbolt notch, saving as much wood as possible on the log. The depth of the notch is usually 1/4 to 1/3 the diameter of the tree; the first cut is made level, and the bottom cut is then made at an upward angle. 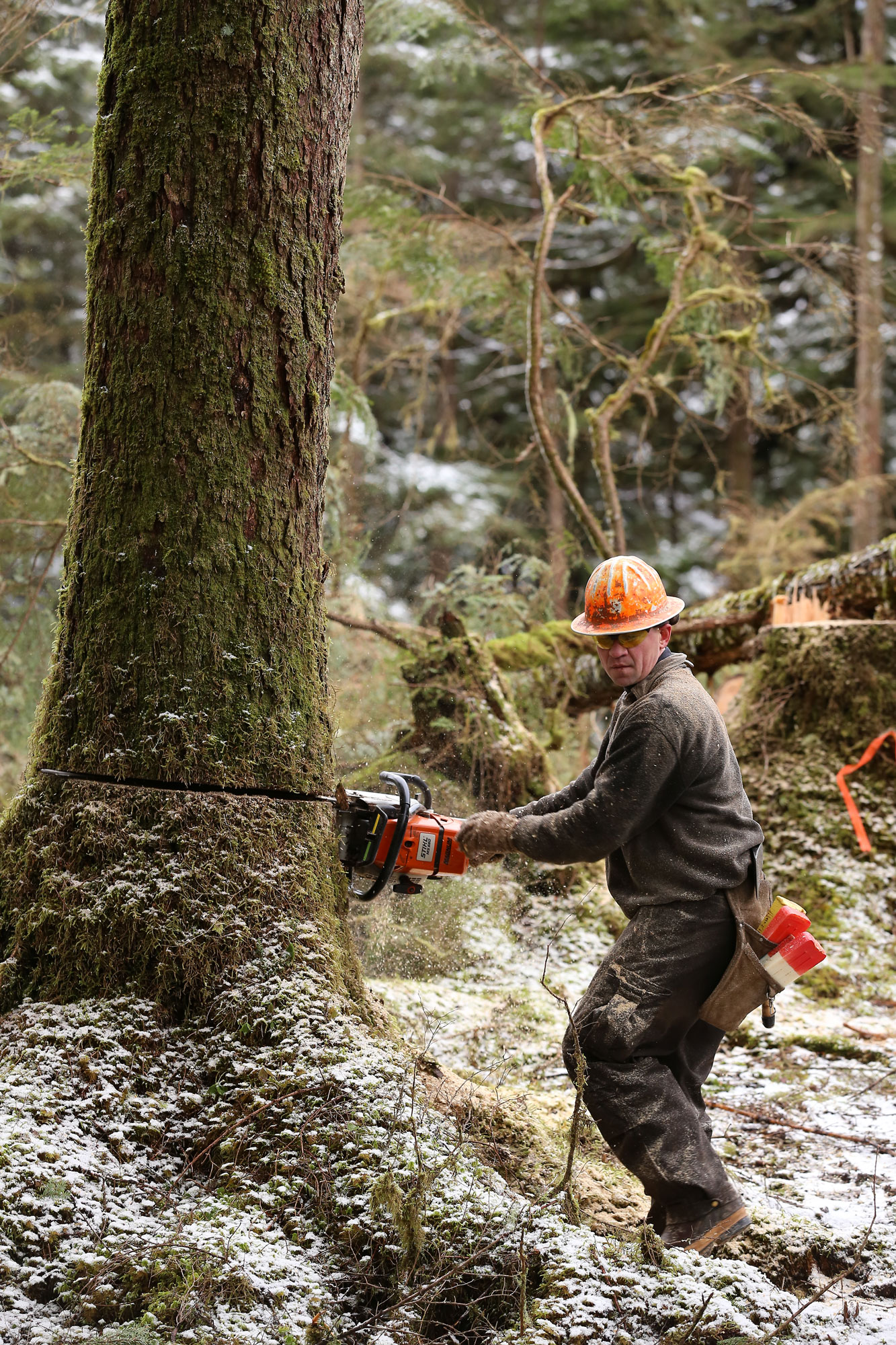 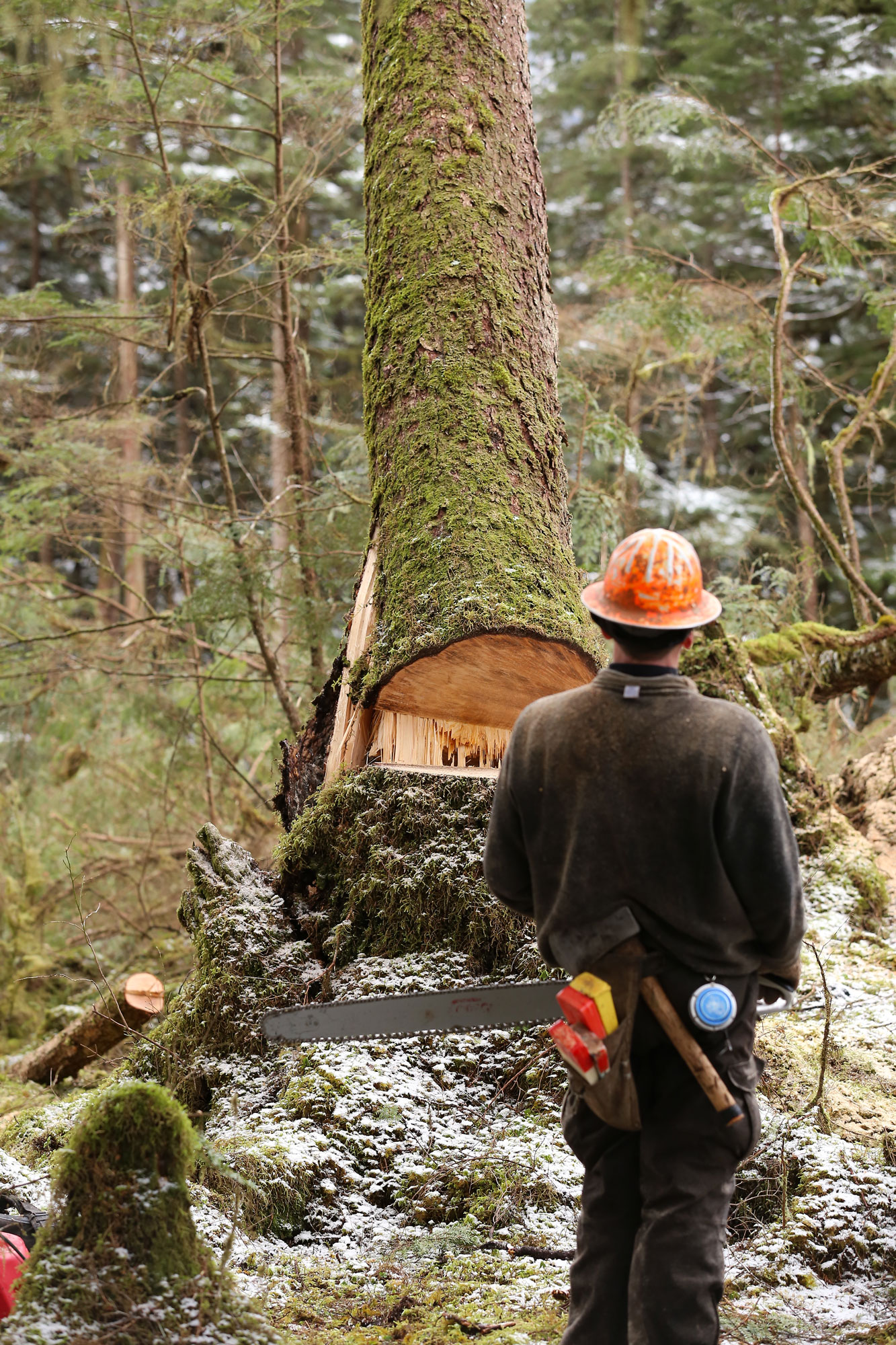 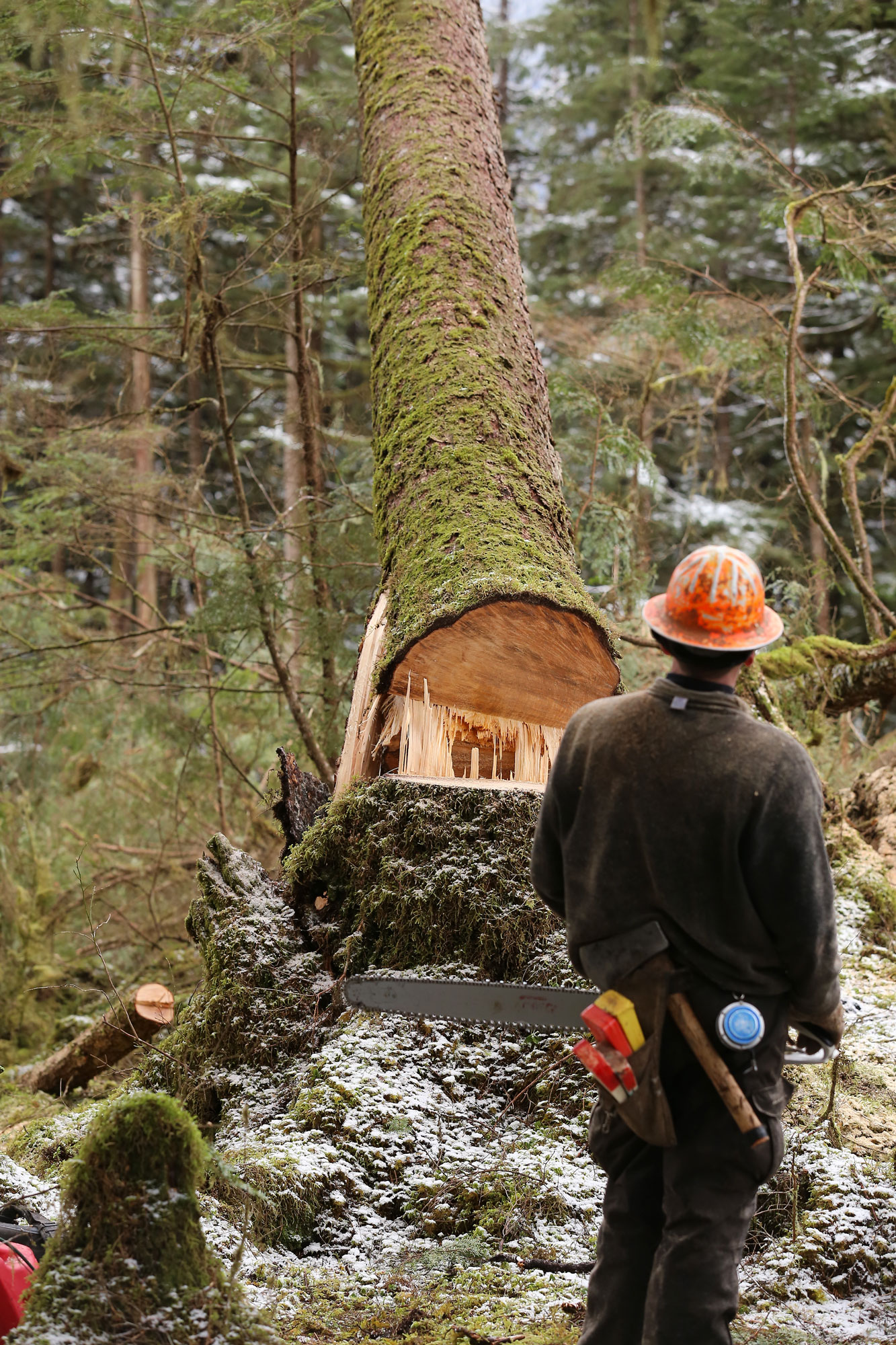 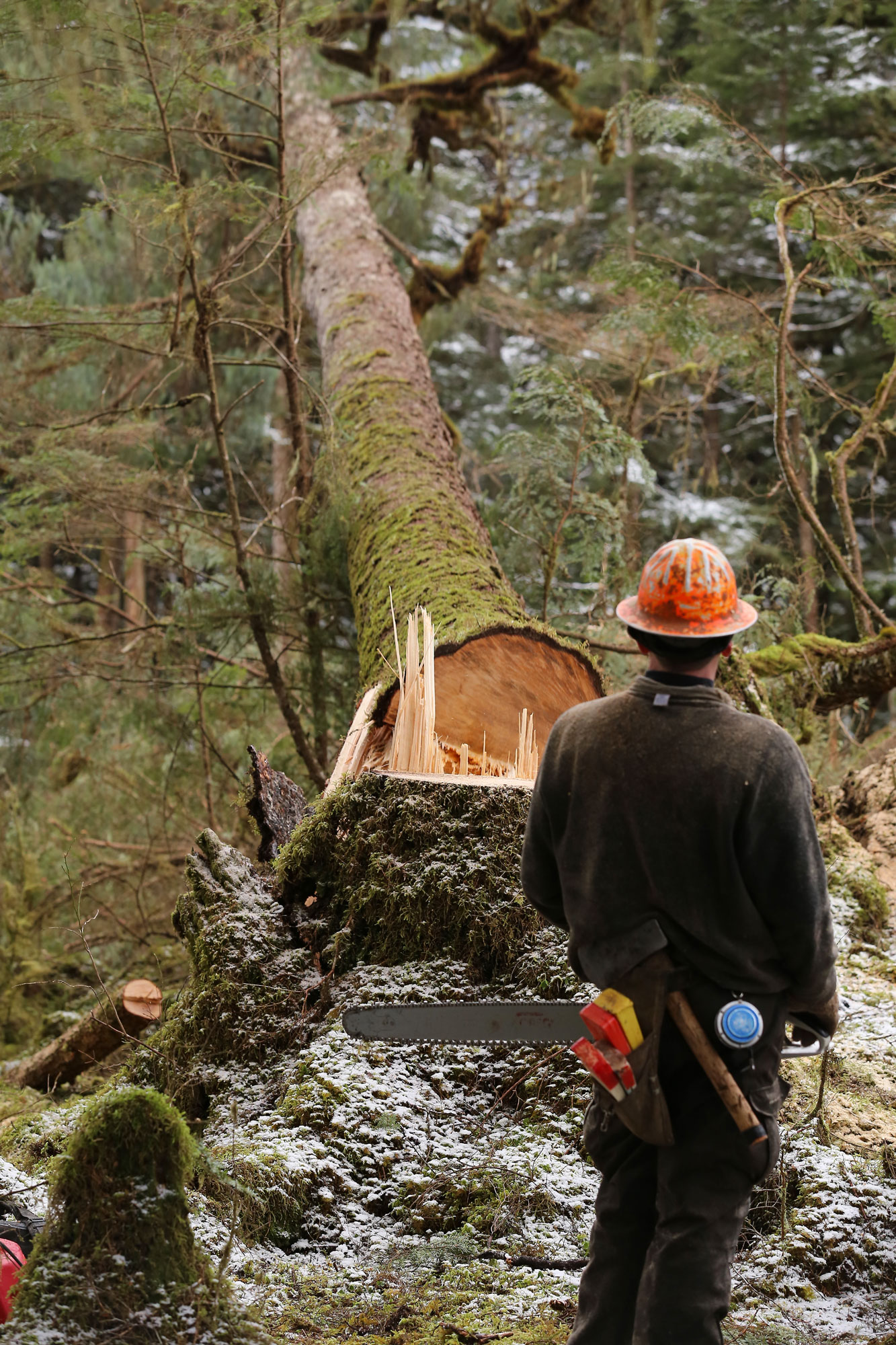 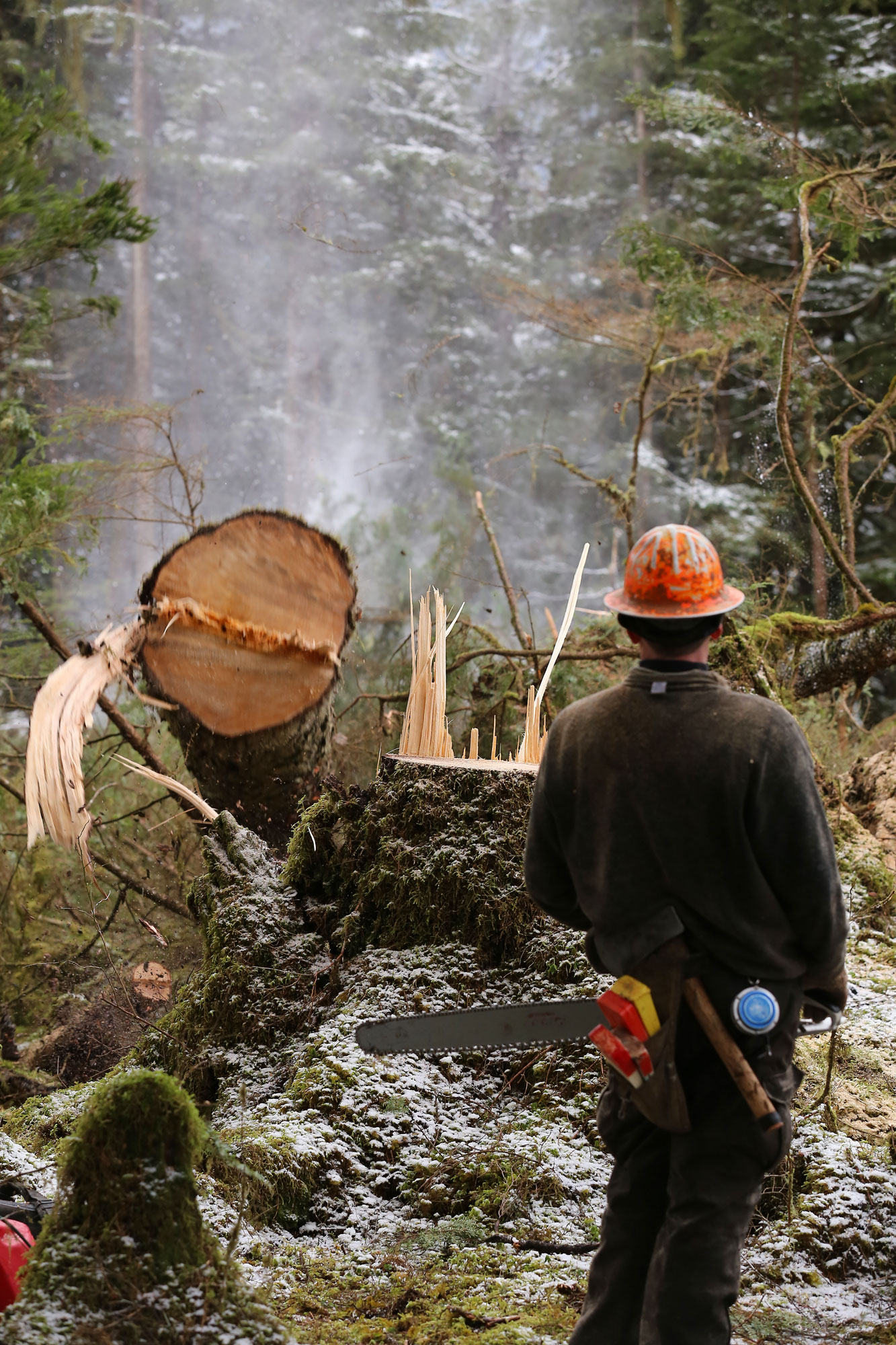 The snow from the branches follows the tree down.

Jeremy's chainsaw has sights on it, and he lines the sights up to where he wants the tree to go. Then he positions the notch (undercut) at ninety degrees to the sight marks on his chainsaw. Jeremy makes the notch in the side of the tree that faces the direction that he wants it to fall (the fall path).  Jeremy then lines up the back cut, which is the final cut, on the opposite side of the tree so that it comes in one inch above, and parallel to, the inside point of the notch. While making that last cut he watches the tree for the exact moment to step away as it starts to fall. He goes about all of this in a mellow, good-natured way, even though it is really tough work.

Jeremy is using a Stihl MS 660 chainsaw with a 32" bar. He carries the saw, a spare bar, spare chains, and tool belt into the woods each day, as well as fuel and oil for the saw. He stops often to tend to the saw, fueling, oiling, and changing the bar or the chain as needed. When changing the bar he meticulously cleans the groove that the chain rides in.

In addition to his tool belt Jeremy has pocketfuls of tricks, learned from years of experience, to make a tree fall where he aims it.

As you can see, there is just a tiny bit of snow on the trees and the ground. Jeremy didn't expect to be falling in Alaska in the winter! Today the temperature has gone above freezing, but there has been cold weather recently. I asked if there were differences when cutting in freezing weather. Jeremy pointed to a bruise on his chin and said that wedges pop out of the cut when the wood is frozen. He also said that chainsaw chains get dull much more quickly when cutting frozen trees. 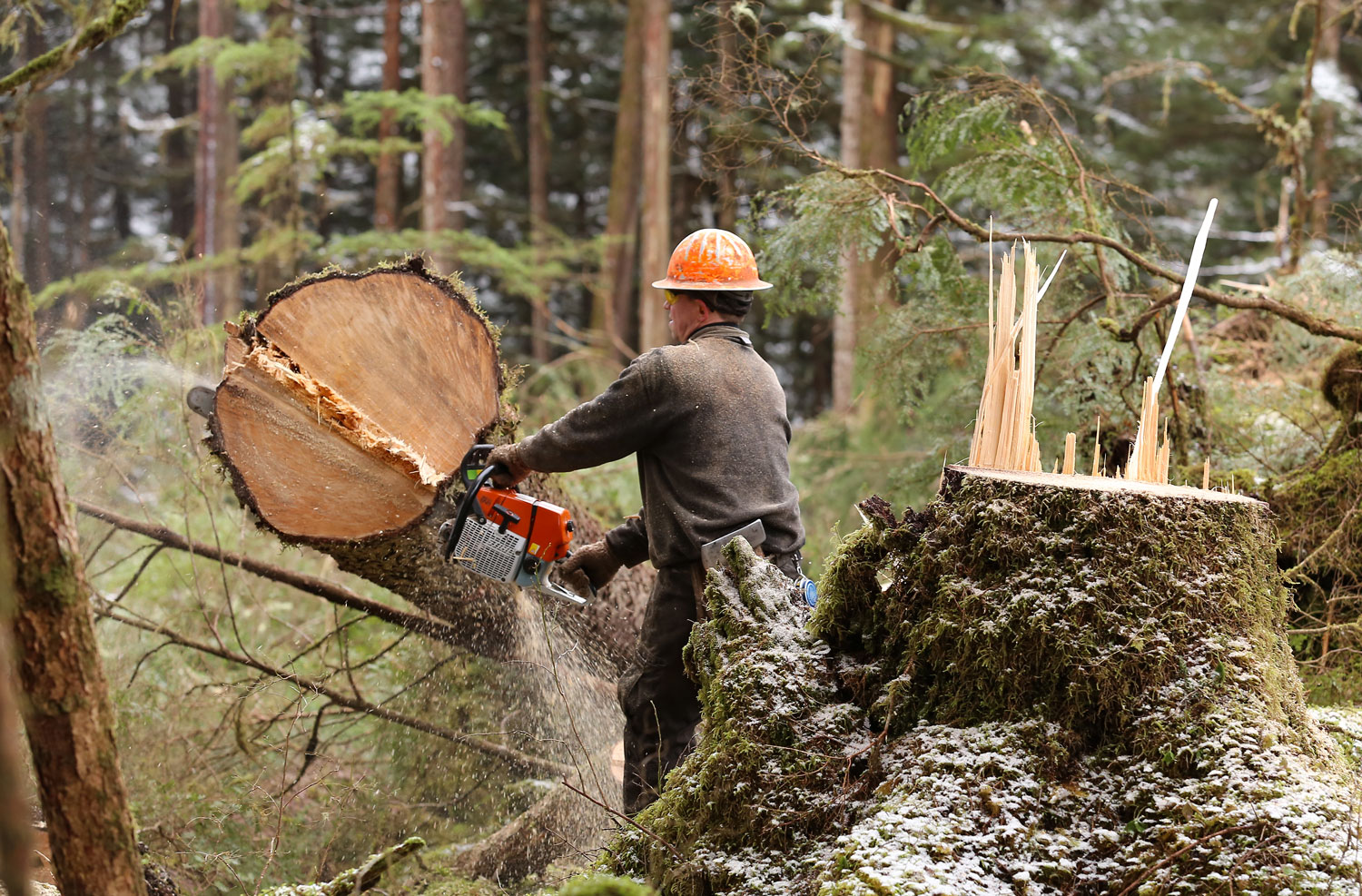 Jeremy makes a cut to take the remnants of the hinge off of the log.

Once the tree is down it is bucked (cut) at whatever length the contract calls for. He clips a tape measure onto the end of the log and walks along the log, to thirty-six feet in this case, makes a mark with his chainsaw, flips the tape free with a quick flick, and then bucks the log. If there are branches or other obstructions along the way then he clears them away with the chainsaw. 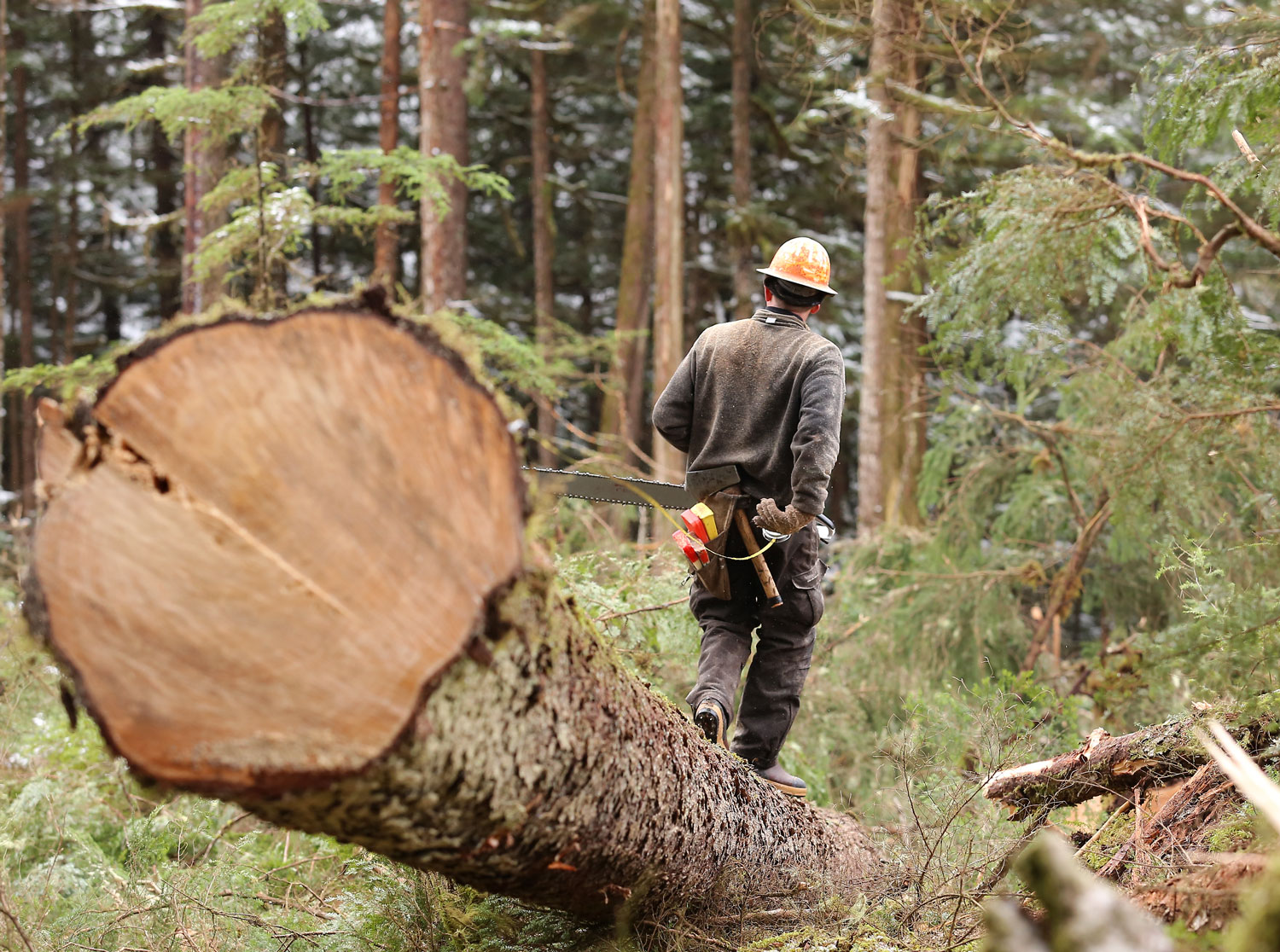 Loggers wear caulk boots, pronounced "cork" boots. On forest moss, logs with loose bark, or even snow, these boots help keep the logger upright. The cleats can be unscrewed and replaced as they wear or are broken. The ones shown below are rubber boots that work well in our rainy clime. Most caulk boots are leather lace-ups 16 inches high. 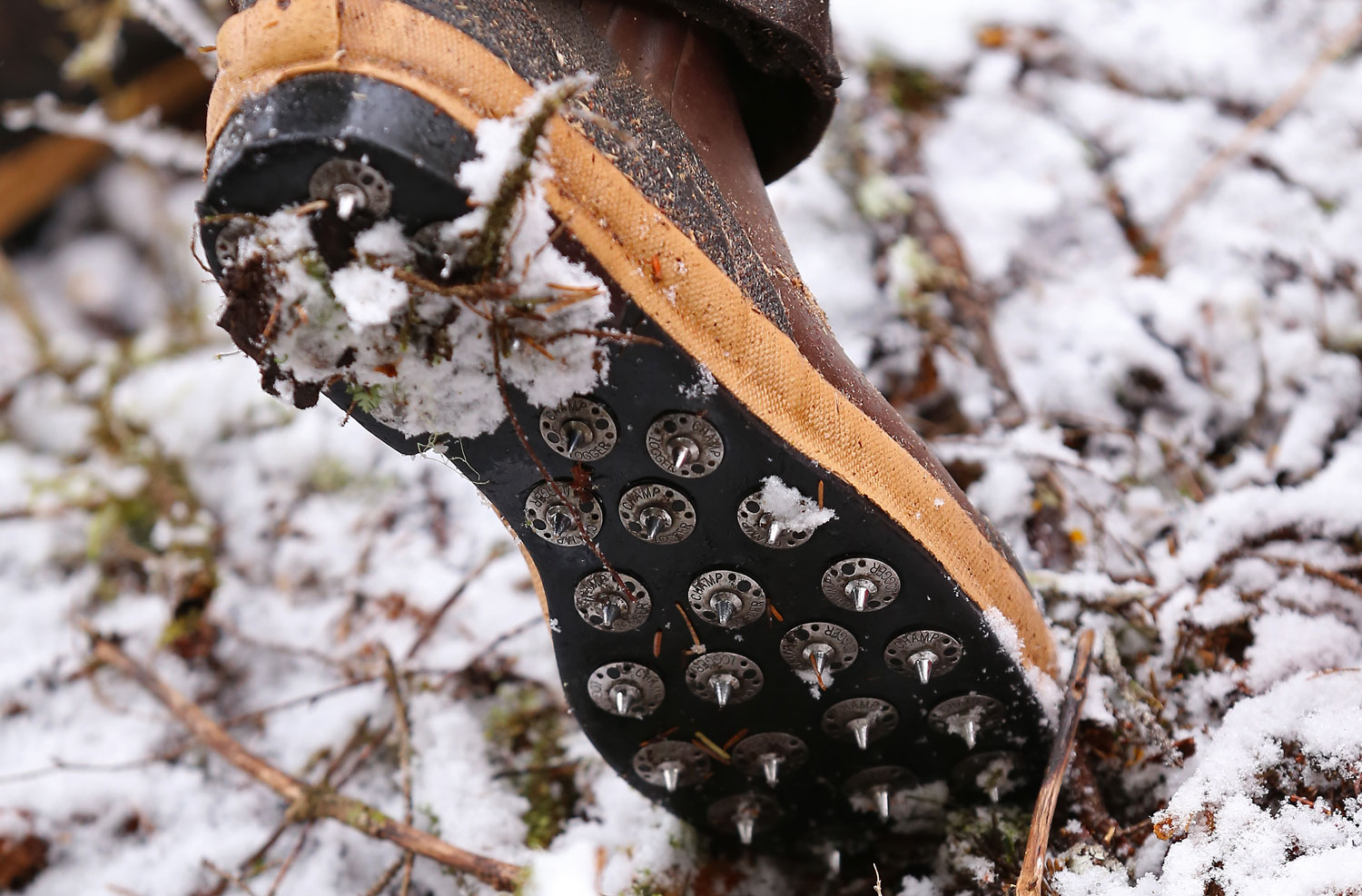 The next tree needed a little extra direction. Jeremy sighted up the tree while he was making the back cut and then inserted a wedge into the cut to keep the tree from pinching the chainsaw bar or from falling to the right. He cut a little bit more, then tapped on the wedge with the back of the hatchet, and then finished the cut. As the tree started to fall he pulled the wedge out and slipped it into his tool belt as he stepped away. 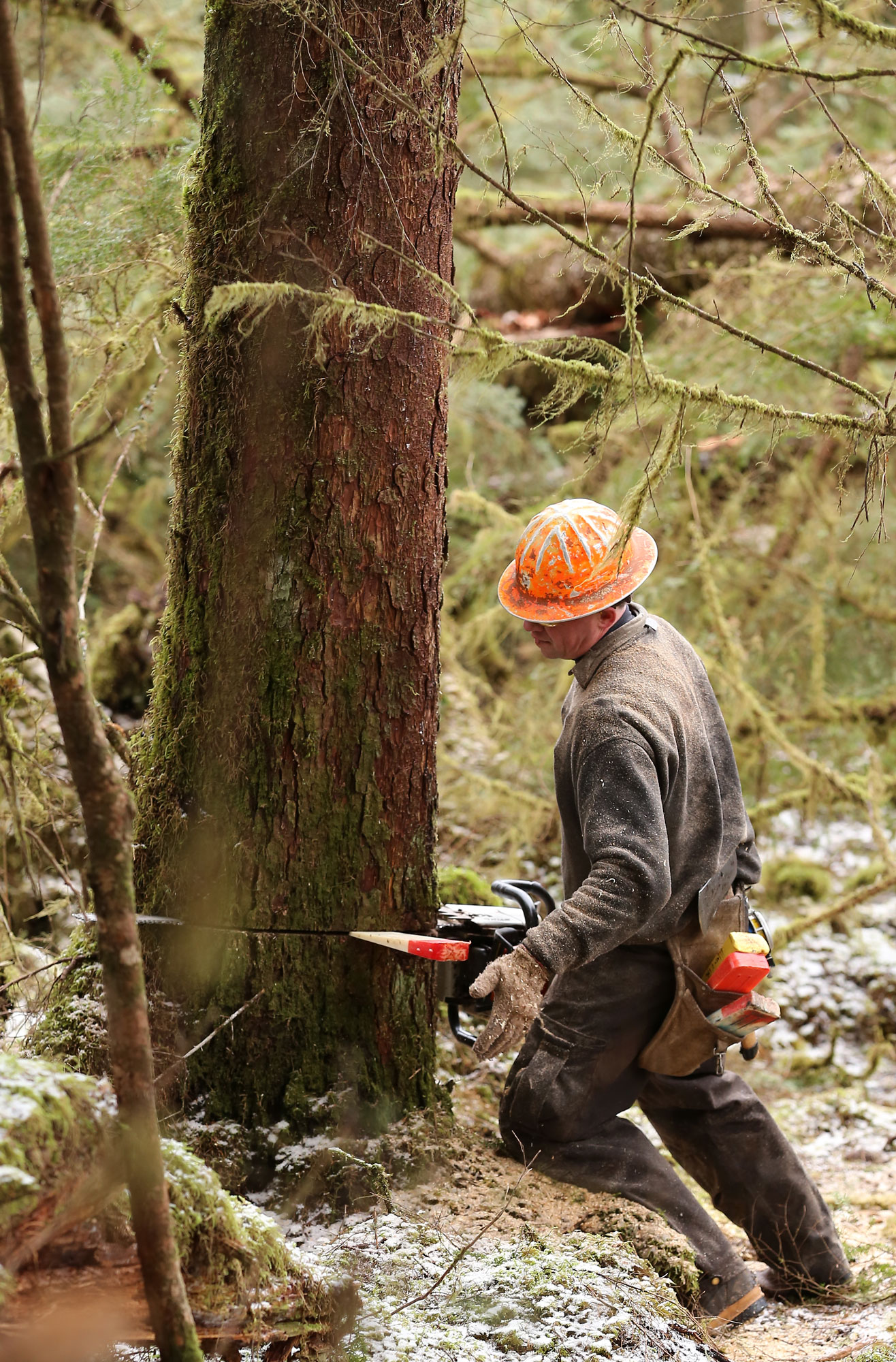 Giving the wedge a little tap with his hand. 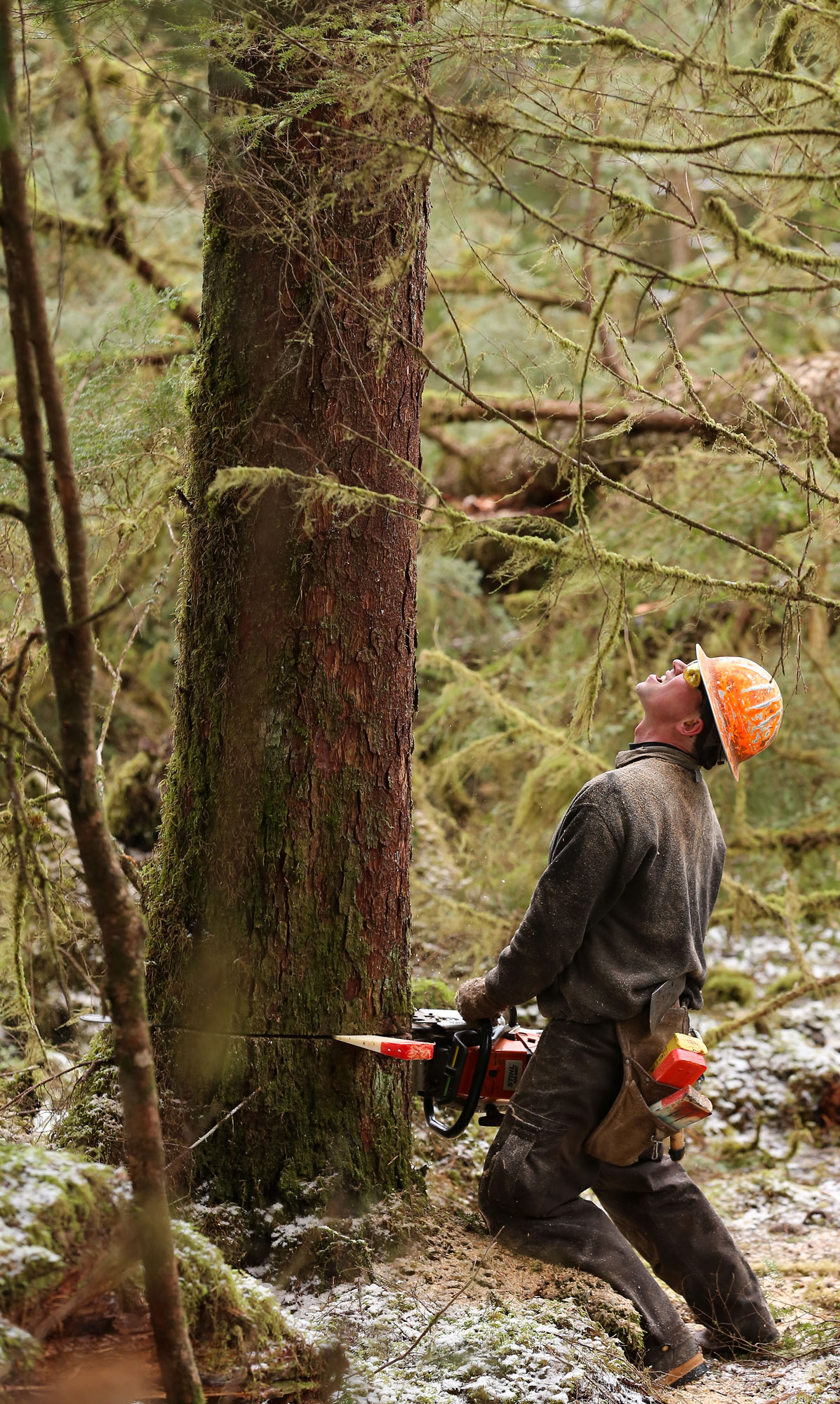 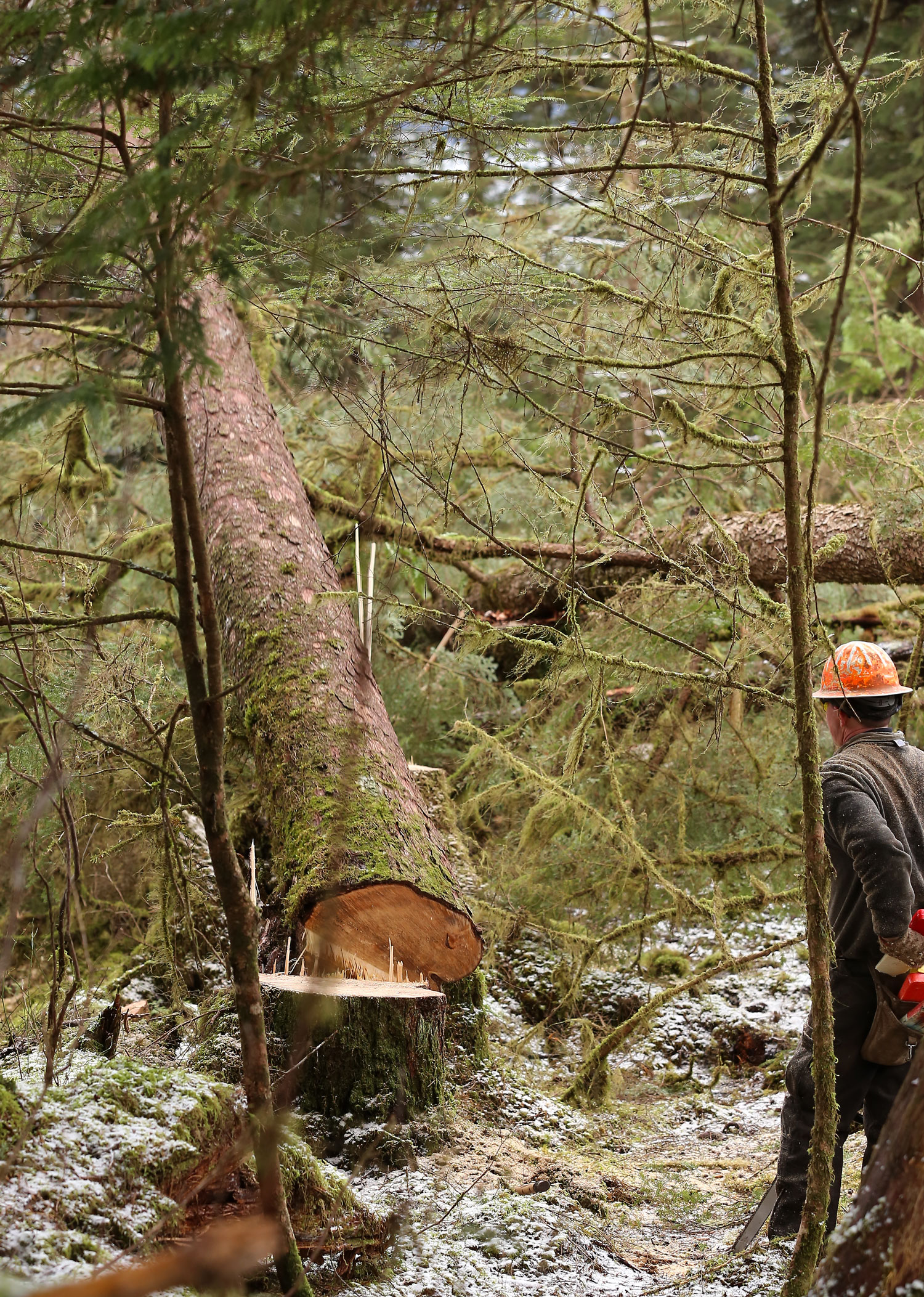 Slipping the wedge back into his tool belt as the tree falls.

Jeremy sized up each tree in a few seconds as he approached it, noting if it leaned, if the branches were more on one side than another, if it appeared to have rot, and many more details. He also planned the fall path. Trees can break if they fall on an obstacle, and become valueless. He has to fall the trees so that they are in a safe position to buck. Also, the logs have to be placed in a manner so that they are easy to pull out of the clearcut. Professional fallers like Jeremy plan multiple trees in advance so that they set up a fall path that meets multiple criteria.

Nothing in this post is in any way intended as instruction nor suggests methods for cutting trees. It is dangerous work, best left to professionals.

More on logging: Logging in Alaska; Falling a Big Spruce