The old anchor windlass and chain.

One of the big projects on the boat is the anchor gear, or "ground tackle" for you boat types. The existing setup was a 120 volt motor powering a wildcat, with rusty chain and a CQR plow anchor. The windlass was undersized and underpowered  for the weight and windage of the boat. Also, I think that the plow anchor is dandy in the right conditions, but Southeast Alaska is just a little low on those particular circumstances.

We used that ground tackle several times. On windy nights I sat in the wheelhouse, watching the radar, and we had to pull the dragging anchor and reset it more than once. Having an island sprout off of your stern on a dark, rainy night is no fun.

Deciding which anchor to use involved a lot of research, but the final decision was made one day in Petersburg. I decided to draw from the example of the successful Petersburg, Alaska fishing fleet. Braving sideways slush from the sky, I walked the docks at South Harbor and saw an overwhelming statement. The fleet trusts Forfjord anchors. 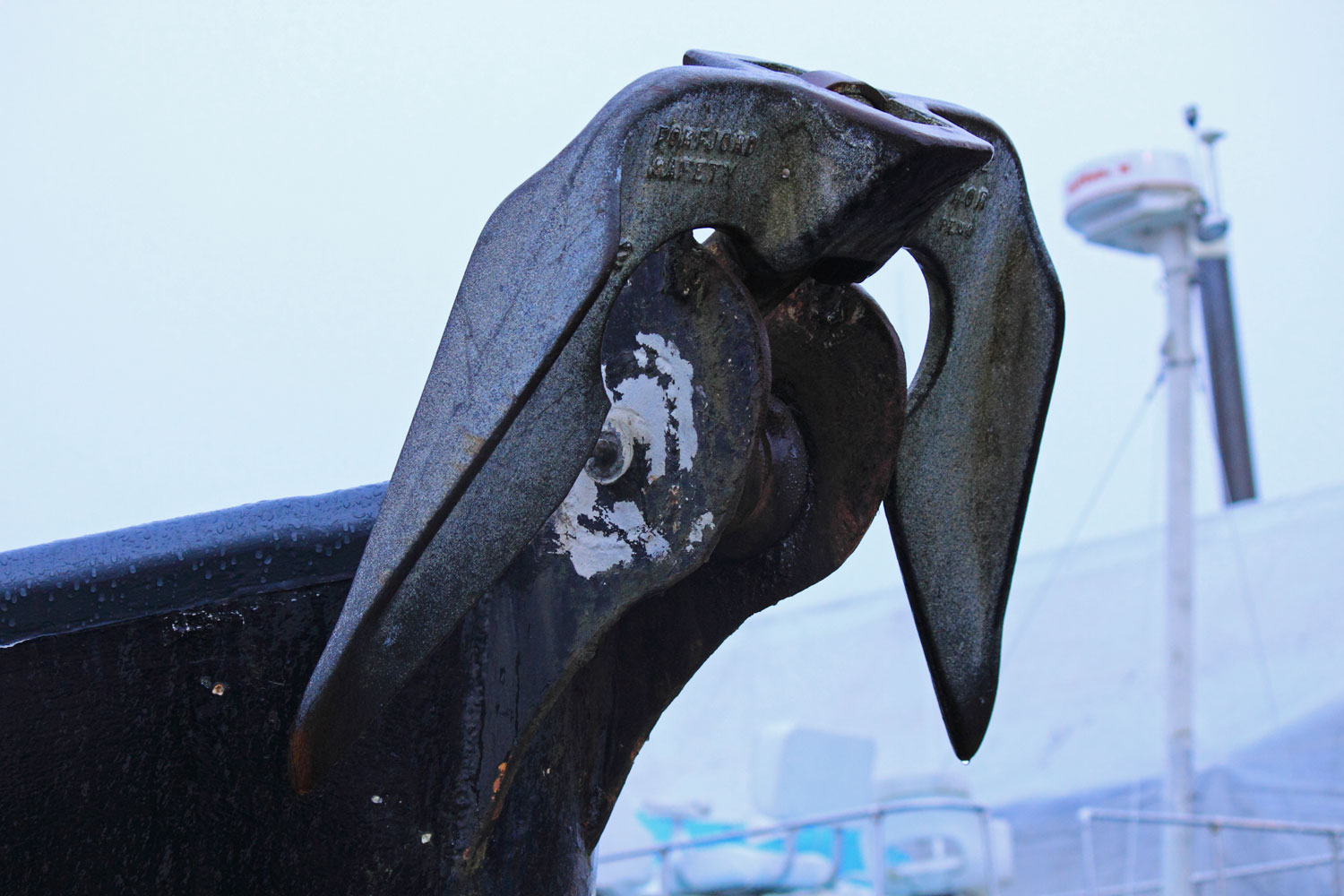 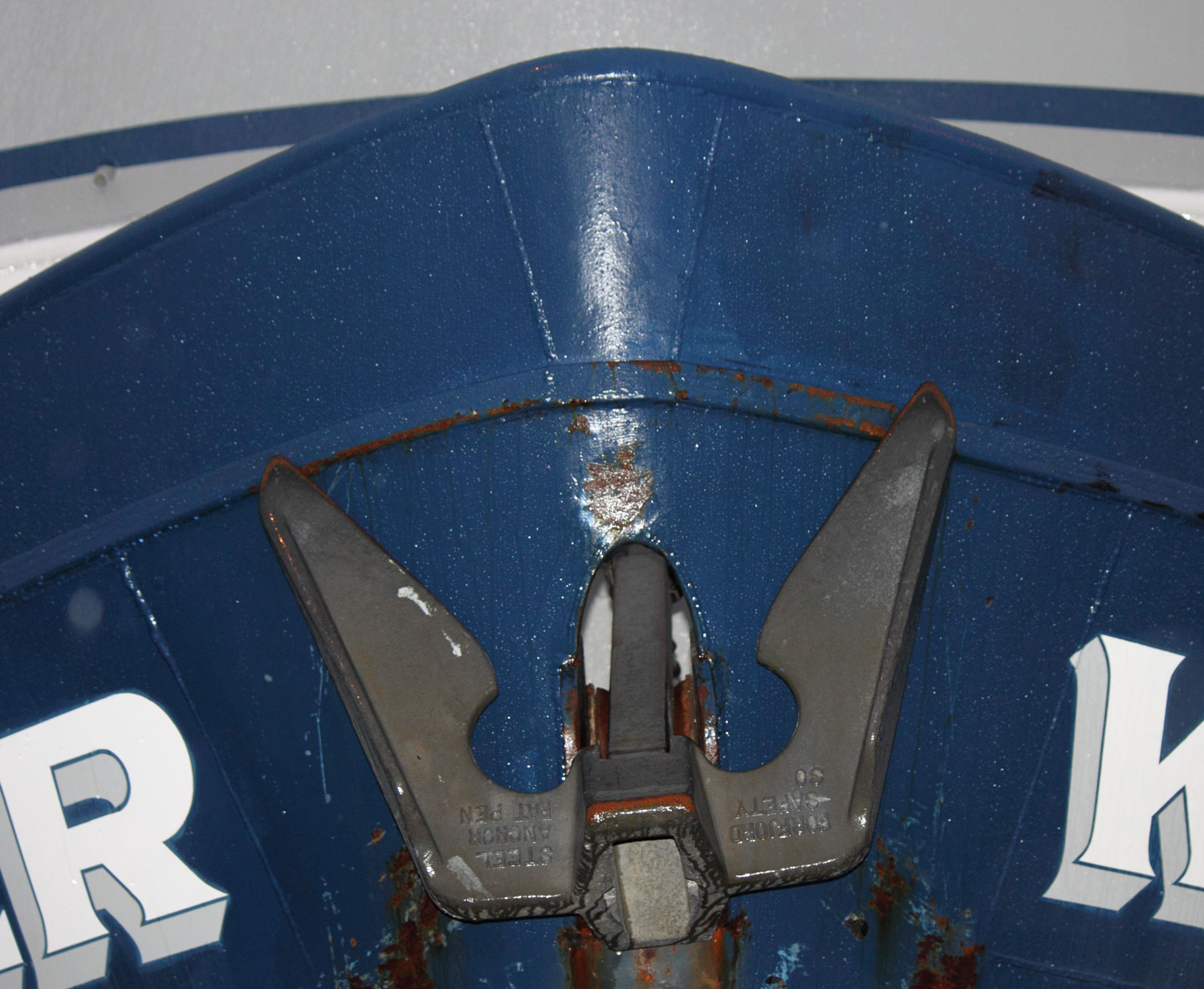 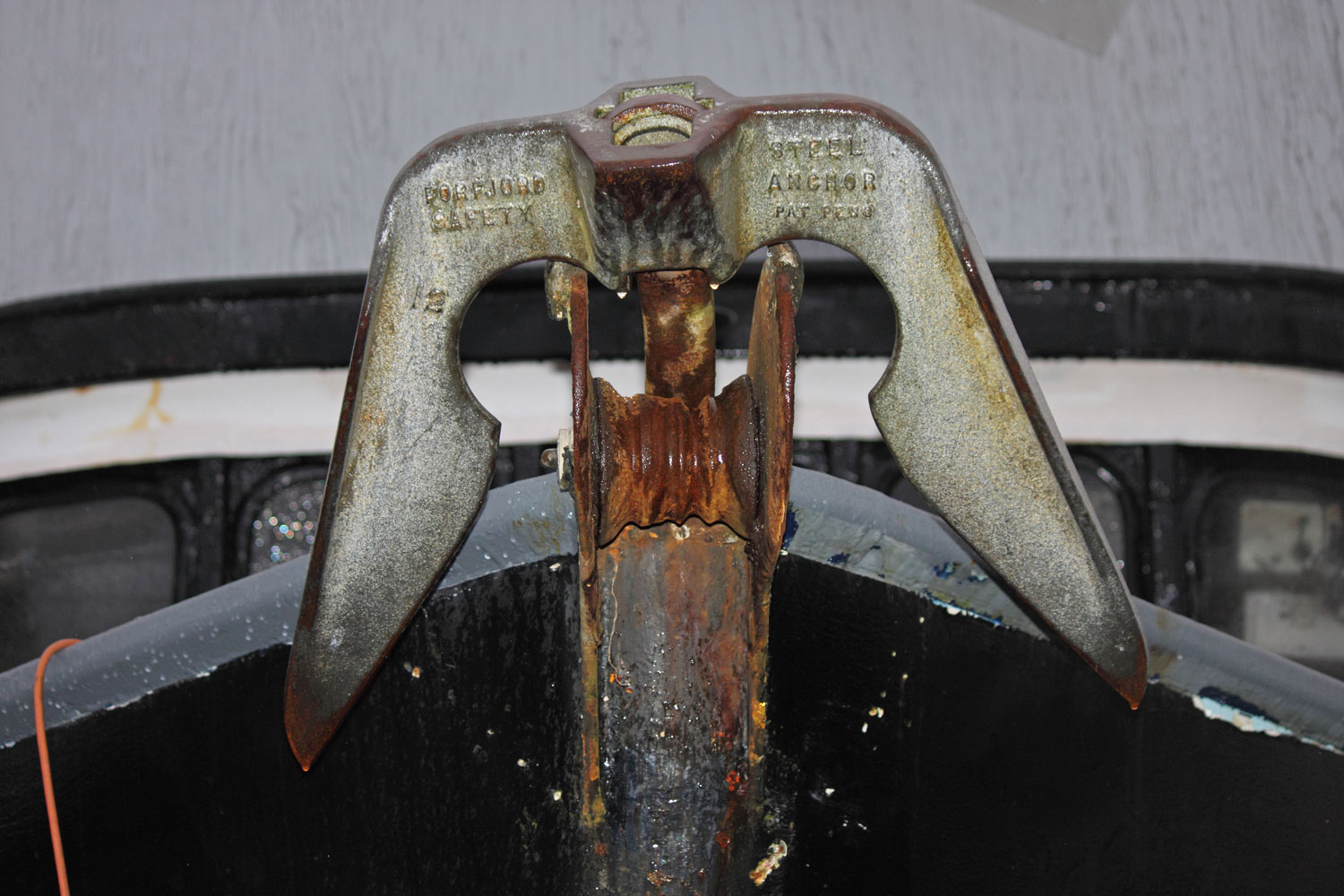 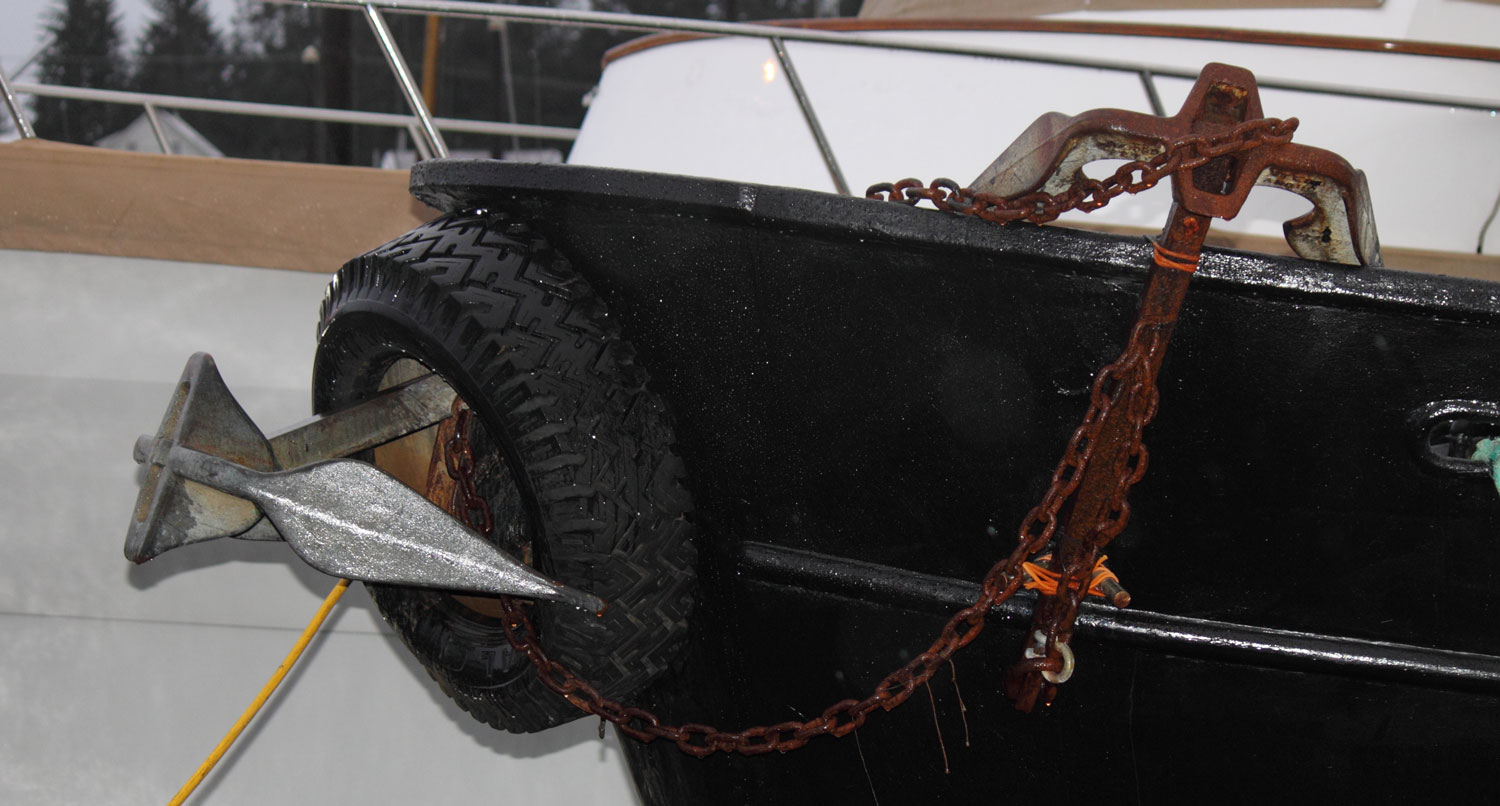 A Forfjord 18 seemed to be about right. That is, according to the information on their website it fit, plus half the guys I talked to said it was too big, and the other half said it was too small. Just right.

The price, at about two thousand dollars, was a little daunting, so I started watching craigslist. One popped up in Homer, Alaska for about half of the new price, and the seller was good enough to work with me. He was going to Anchorage anyway, so he dropped the anchor at Alaska Airlines air freight. I had called around, and shipping that 210 pound anchor on the jet was $100 LESS than shipping it on the barge. And it got here in a day.

The winch was another learning curve. I spent hours reading and comparing. At The Old Salt's (my dad's) insistence I called Union Machine Shop in Ketchikan and started working with Rod Bray. After he looked at photos and got a bunch of information he designed a big, stout winch, and quoted me a price that made sense. Once the winch was built it traveled to Wrangell via barge, and then Arrowhead Transfer delivered it to the boat, which was in the yard at the time. Cool, huh? 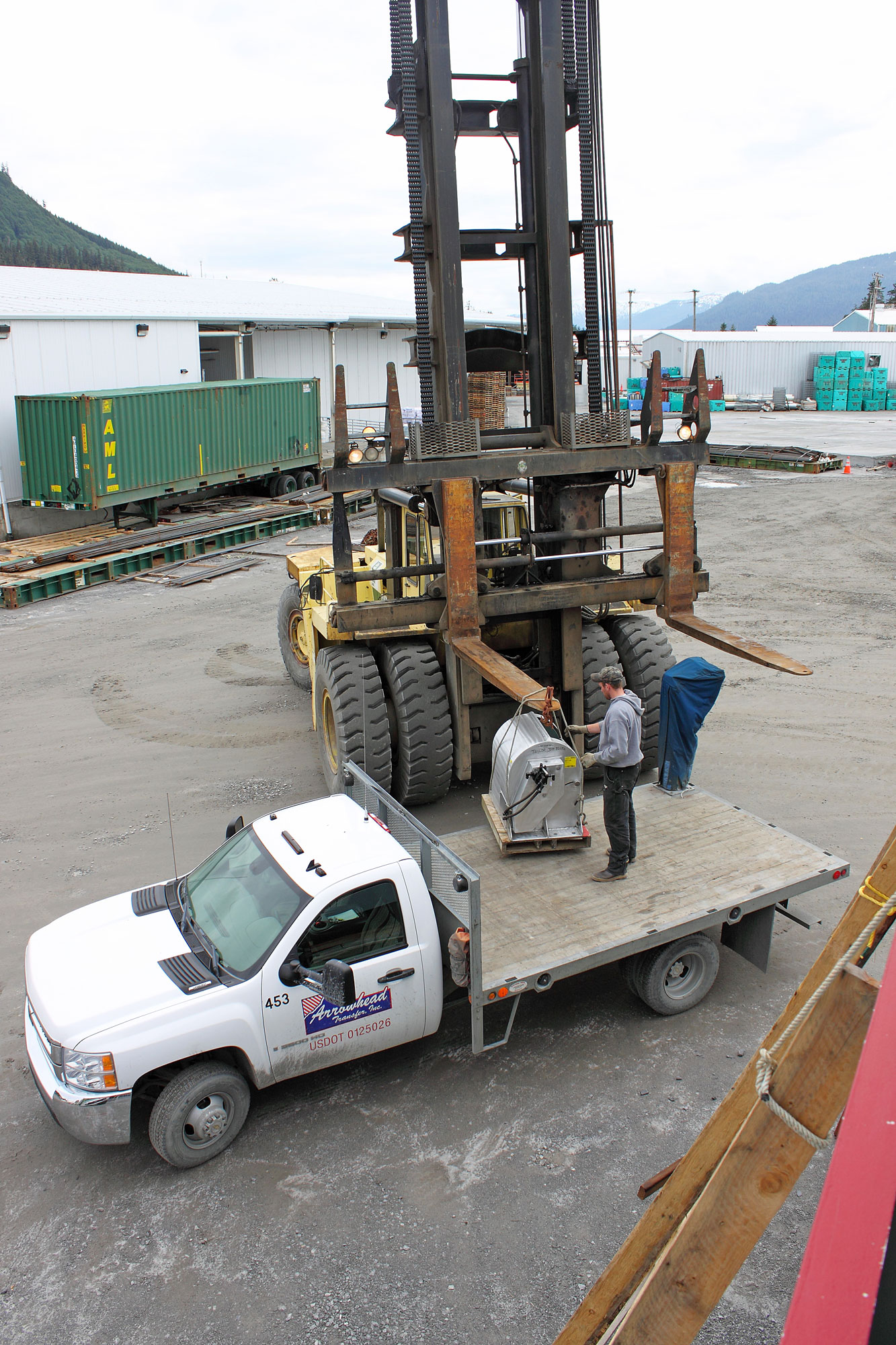 The anchor winch being delivered to the boat in the boatyard. 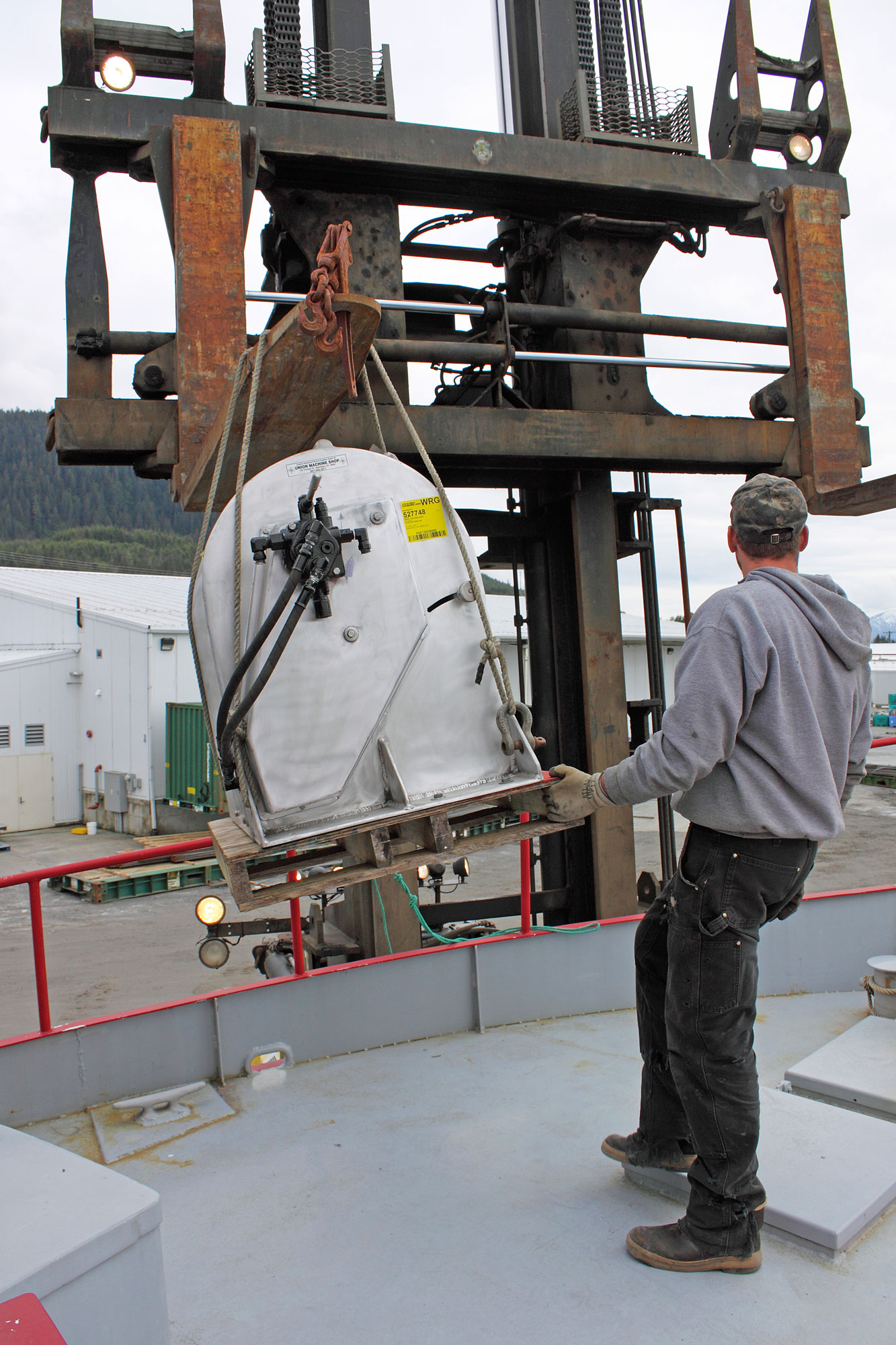 That is one big-hummer forklift! 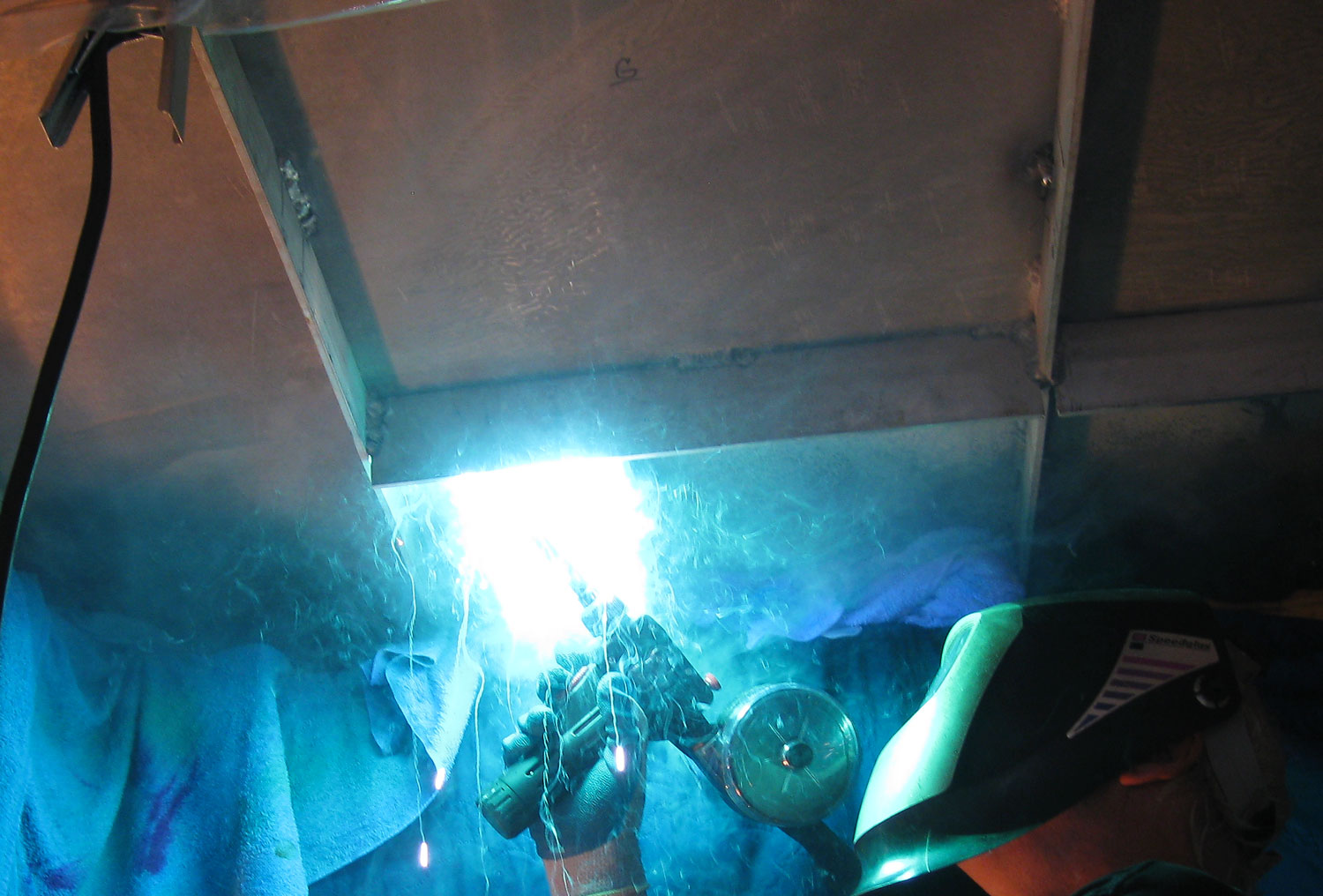 Welding reinforcing plates and angles under the deck supporting the anchor winch.

Then the work really started. The deck needed to be reinforced to withstand the strain of the winch pulling the anchor. My sweetie worked for several days carefully pulling down the headliner in the cabins below the deck. He cut thick aluminum plates and pieces of angle to strengthen the deck. He clamped everything into place, measured and marked, and drilled holes through the deck. I put Sikaflex on the deck and the bolts, and we bolted the winch down tight. Then in the stateroom below we put up soaking wet blankets and towels and put a welding blanket on the floor and bunk. He welded the reinforcing pieces to the deck and stringers and I stood by on firewatch armed with a hose, squirt bottle, and several fire extinguishers. 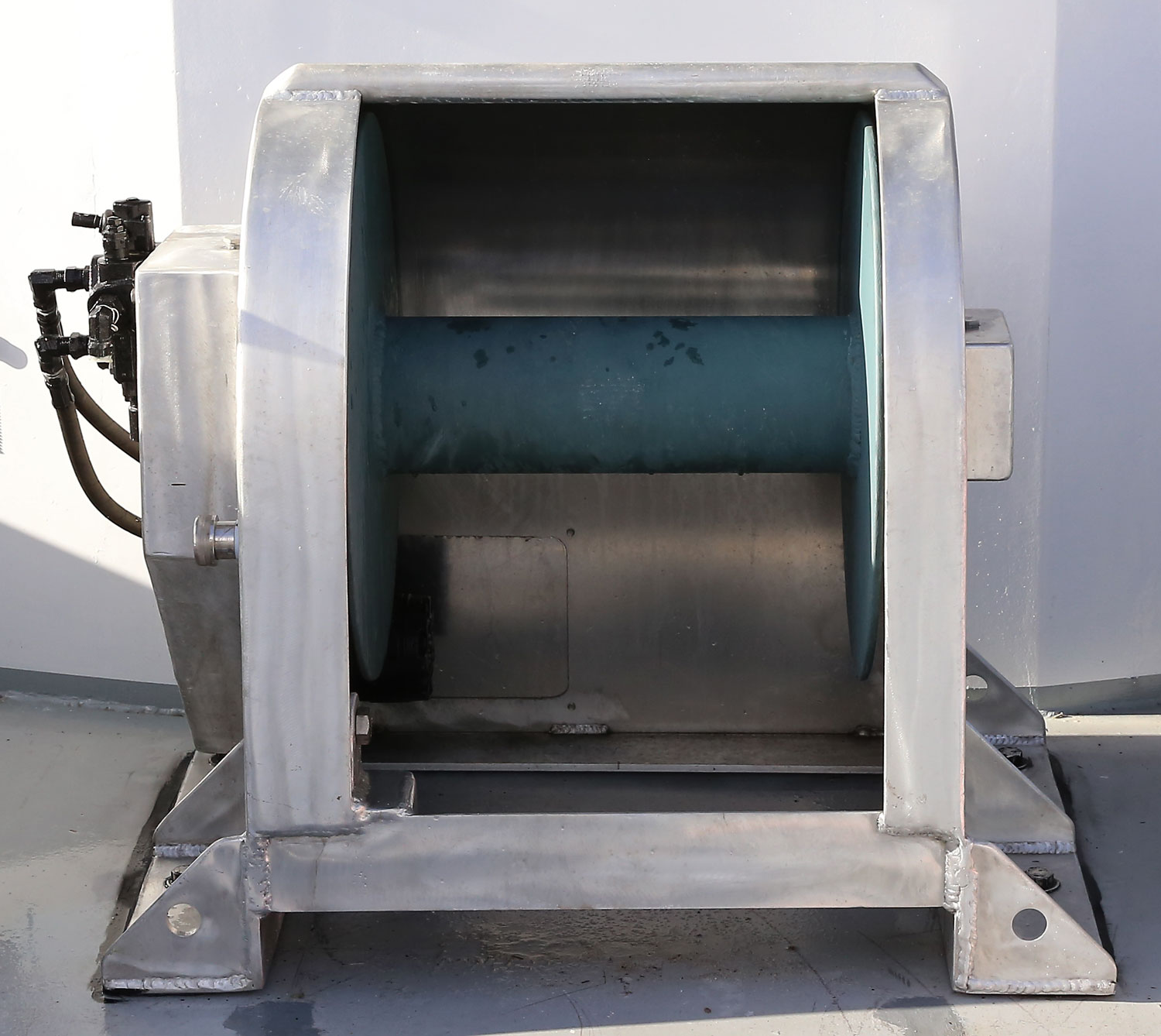 What a great feeling! The winch was in place! But that was just the beginning. It is a hydraulic winch, and the boat had no hydraulics. Rod Bray mentioned that he had a hydraulic pump that would work with one of our Cat 3208 main engines, so we said yes to that. We also had hydraulic hoses made, and strung them through the service tunnel from the engine room to the front of the wheel house. An old engine oil tank needed to be converted to a hydraulic oil tank, and a new bow roller needed to be built. So we breezed on down here to Ketchikan, and the work with Union Machine Shop is progressing well. 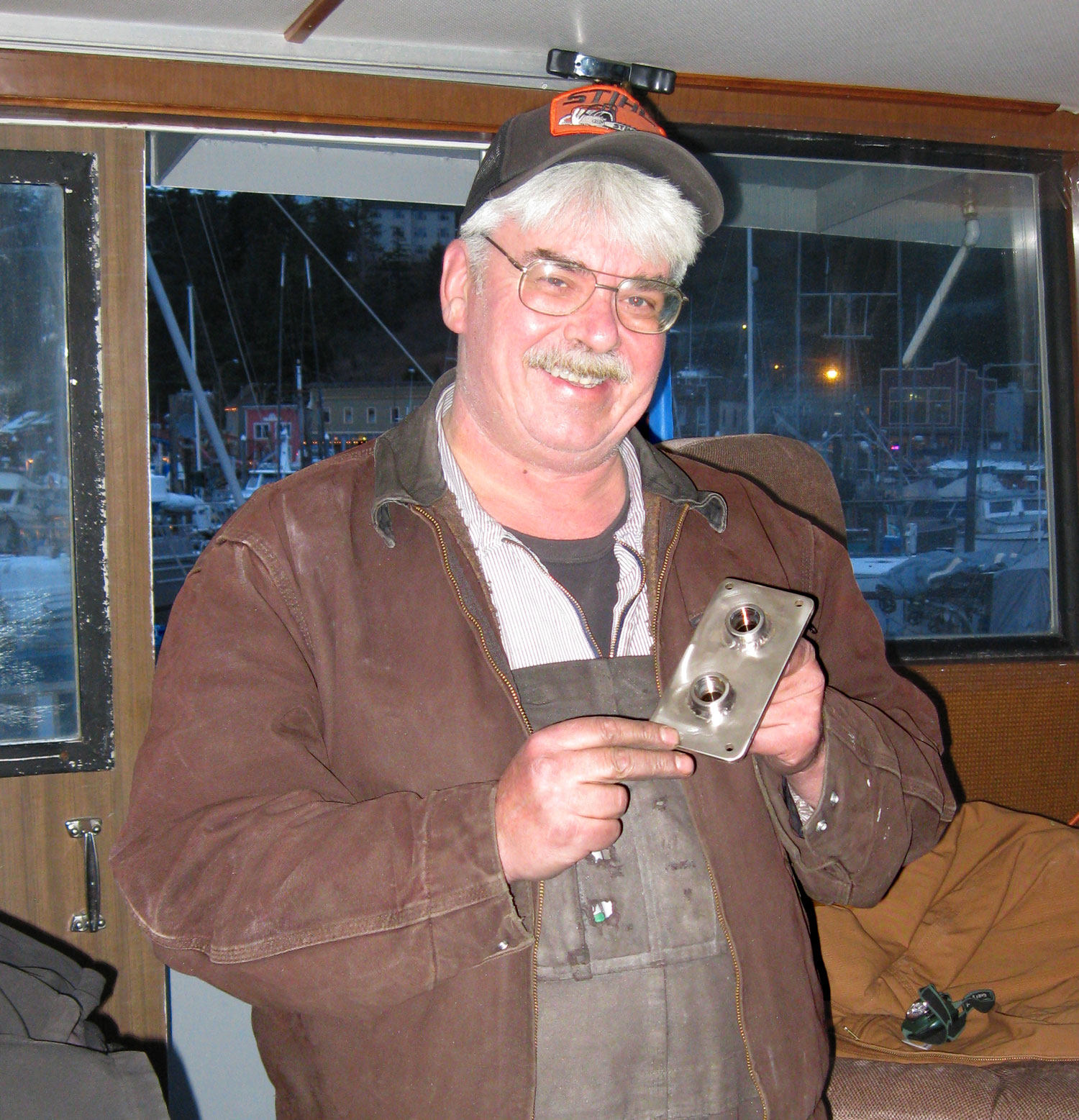 Meet Harley Bray. He is a great, good-natured guy, who installed the hydraulic pump, tank fittings, and lots more!

The fittings that take the hydraulic lines through the front of the wheelhouse. Hoses were then run from the fittings to the winch.

More on the anchor project in the next post!

Disclosure: We have not received any promotional consideration from Union Machine Shop, Arrowhead Transfer, or Forfjord. Zero. Zip. Nada. It's about being happy with their work/products, nothing more.

Related post: Heading to Ketchikan, Progress on the Anchor Project