Drumbeats resound through the forest as I make my way along the Kasaan Totem Trail to the Whale House. The Haida singers’ voices, rhythmic and strong, fill the trees. The easy trail is wide and flat, and soon there is a view of the beach through the forest fringe. I can see large canoes at the waterline, along with a throng of people. They are singing traditional Haida songs, proud and happy that Chief Son-I-Hat’s Whale House is rebuilt after three years of work, and welcoming visitors who had traveled far to be here. 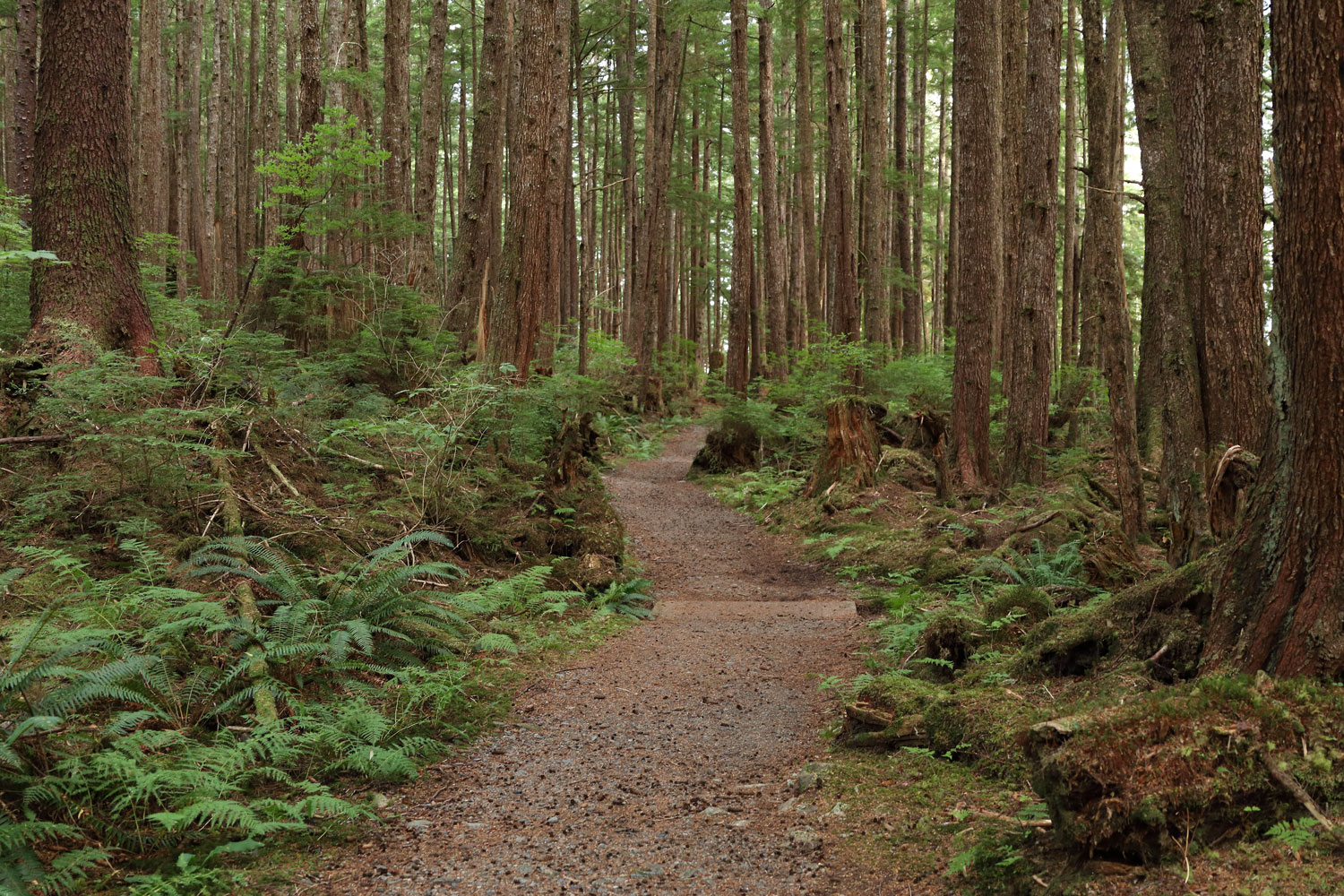 The pretty Totem Trail from Kasaan to the Whale House is well groomed and easy. 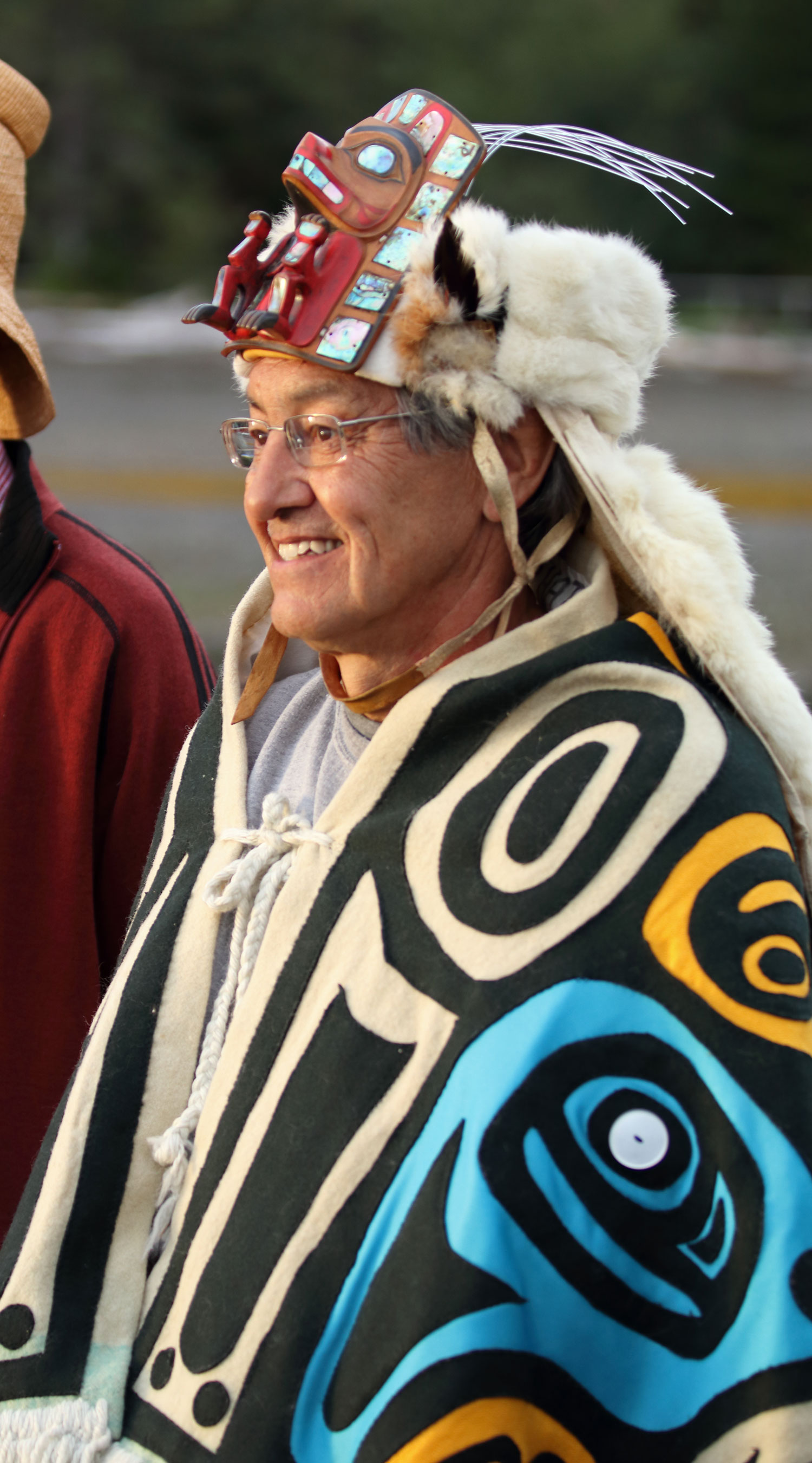 The village of Kasaan lies along a south-facing shore on Prince of Wales Island in Southeast Alaska. Home to around 75 people, it is usually a quiet place. On September 3, 2016, though, it was bustling with Native people from around Alaska and western Canada as well as tourists and vendors. Seaplanes and tour boats brought people to Kasaan. The line of parked cars along the single gravel road into town was so long that a shuttle bus ferried vehicle occupants to and from their cars. Everyone enjoyed a day of Haida celebration and they were treated to a generous dinner that included some of the traditional Haida foods.  Graced by excellent weather, the song-filled ceremony created a buoyant atmosphere. This was a celebration of history and renewal. 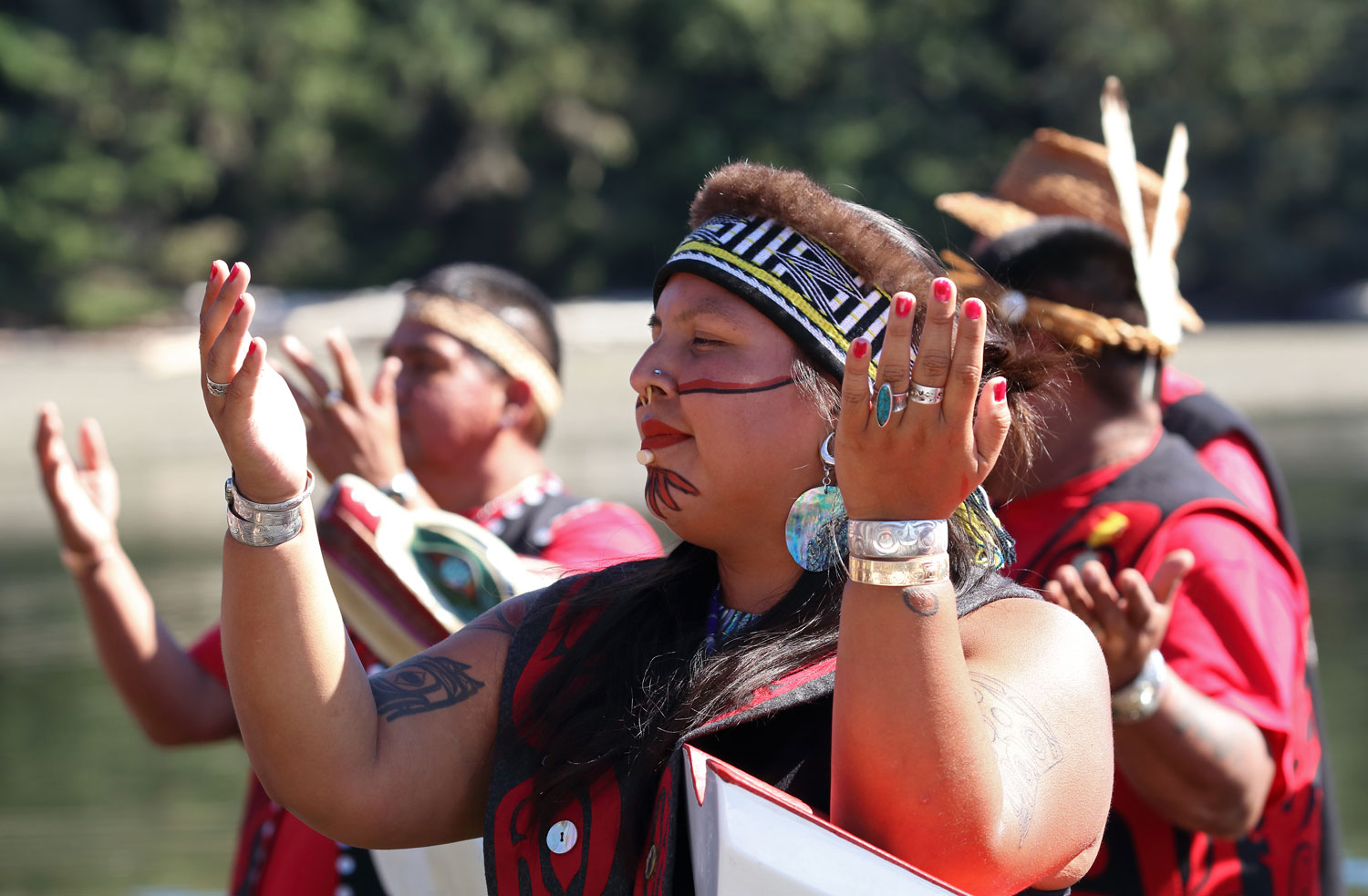 Dancers standing by their canoes during the ceremony.

Haida Chief Son-I-Hat’s Whale House was first built in 1880 , rebuilt in 1938, and then rebuilt again over the last three years by a dedicated team of four. Gitajang (Glen “Stormy” Hamar), and apprentices St’igiinii (Harley Holter-Bell), Nang K’adangaas (Eric Hamar), and wooshdeiteitxh (Justin Henricks) took on the project and saw it through. They painstakingly refurbished salvageable parts of the historic building, and then replaced the rest using traditional materials and methods. Their dedication shows in each hand-adzed plank making up the 45 by 45 foot clan house. Their efforts were backed by the Organized Village of Kasaan, Kavilco Incorporated, and the Kasaan Haida Heritage Foundation. 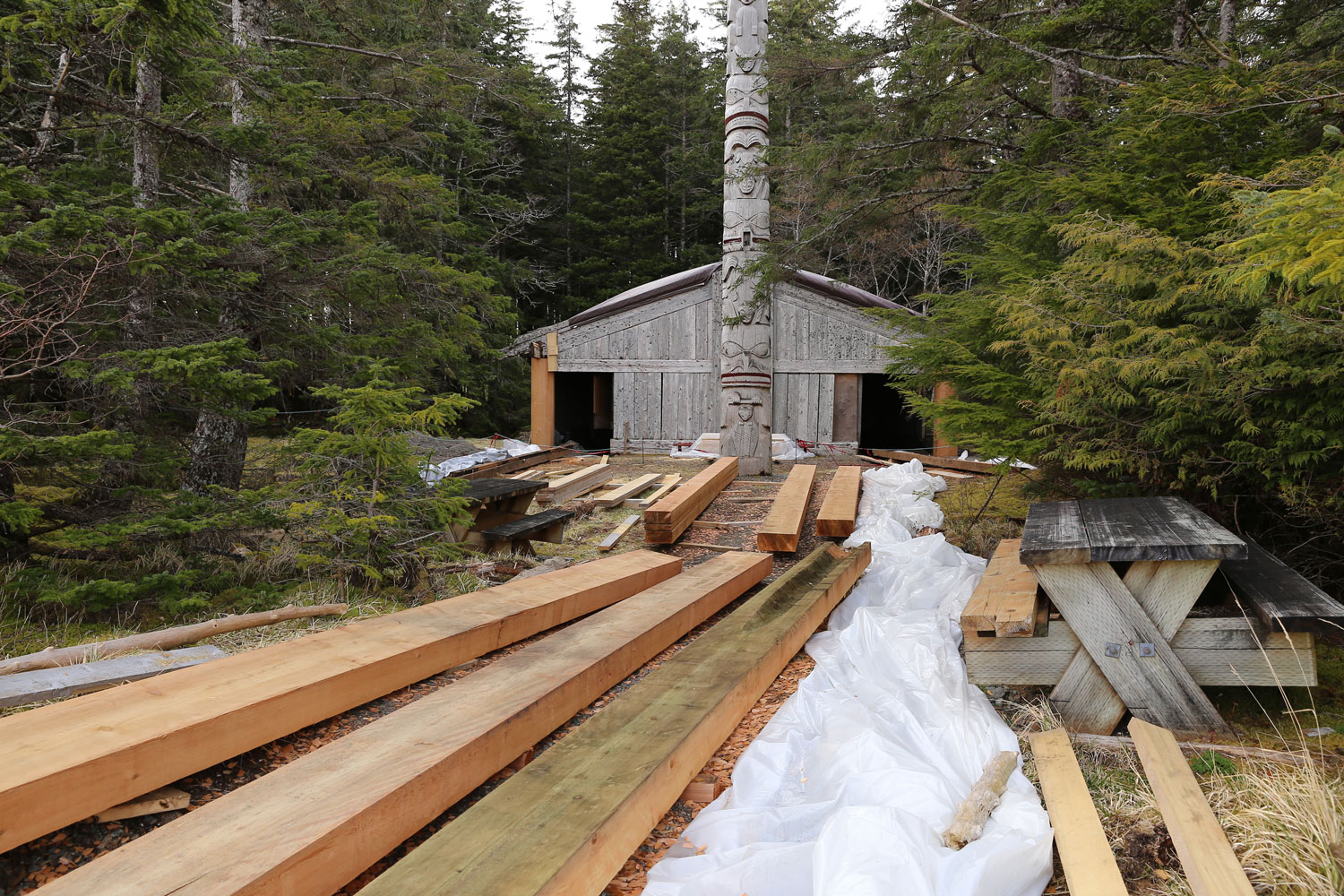 This is the Whale House during the restoration work in 2014. 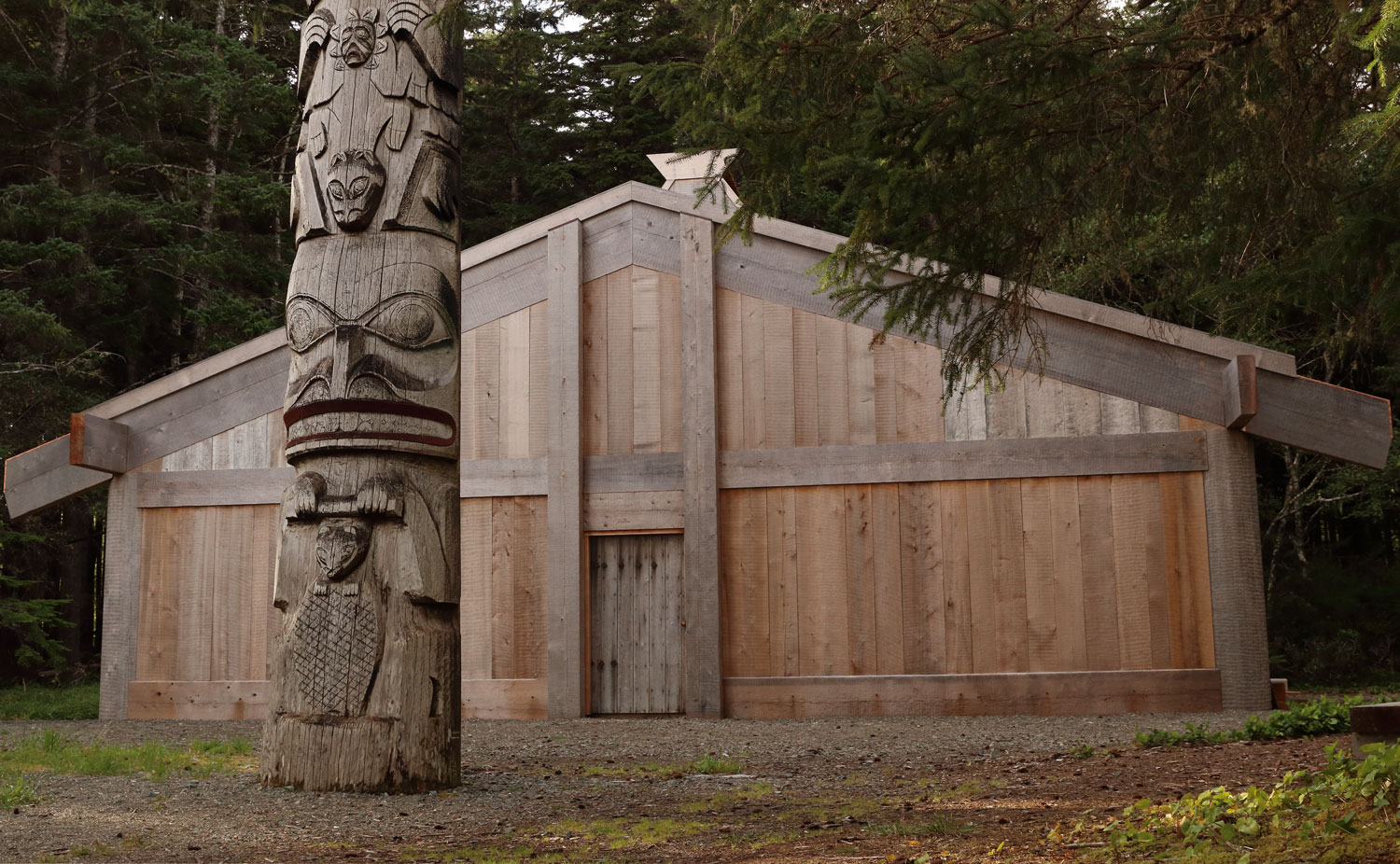 The longhouse in 2016 just before the work was complete. 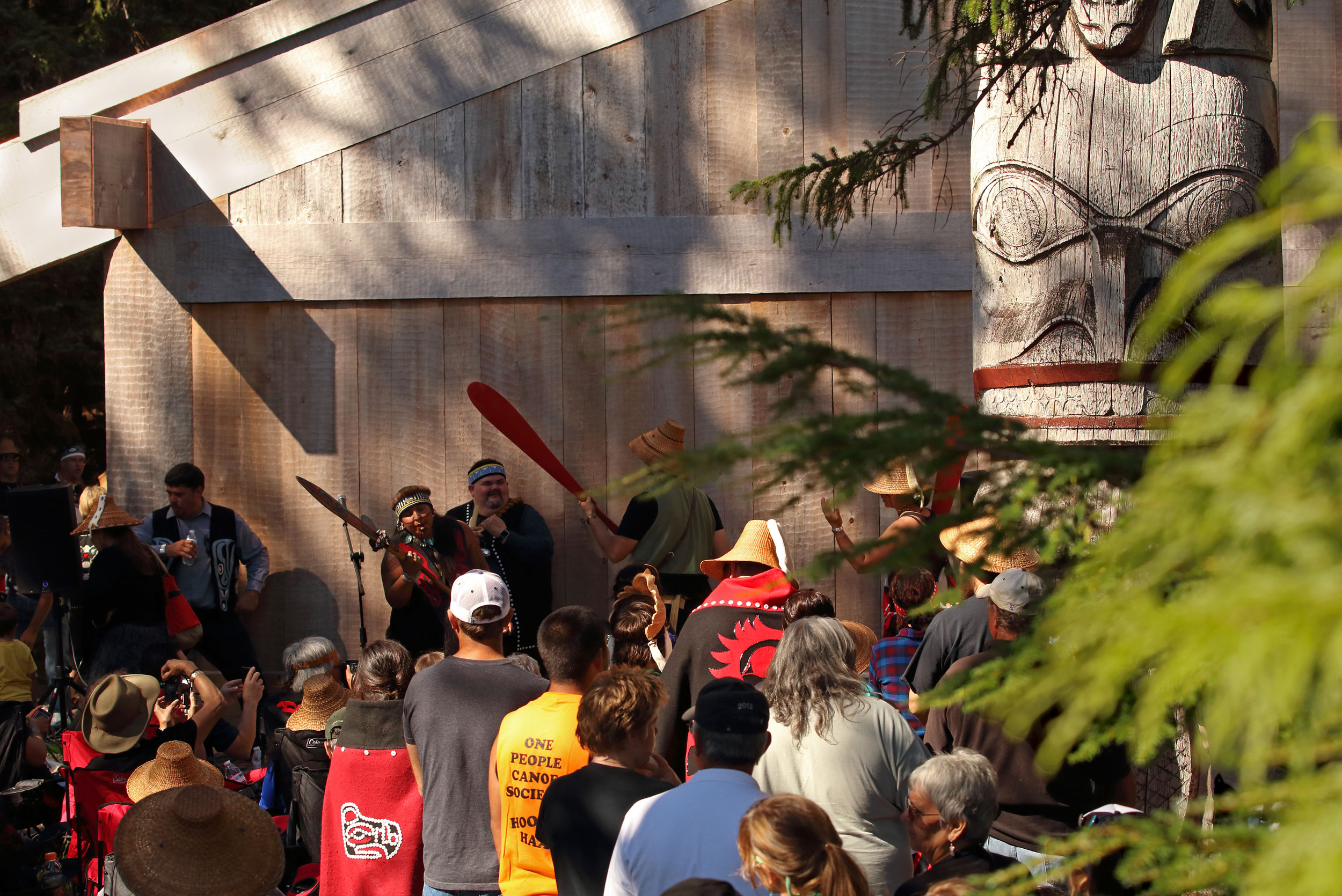 Inside of the building the two carved house posts that depict supernatural creatures are the originals, having survived since 1880 in this coastal temperate rainforest. The Head House Totem in the center of the wall is older yet. It was moved to Kasaan from an earlier clan house, but no one knows exactly how old it is. 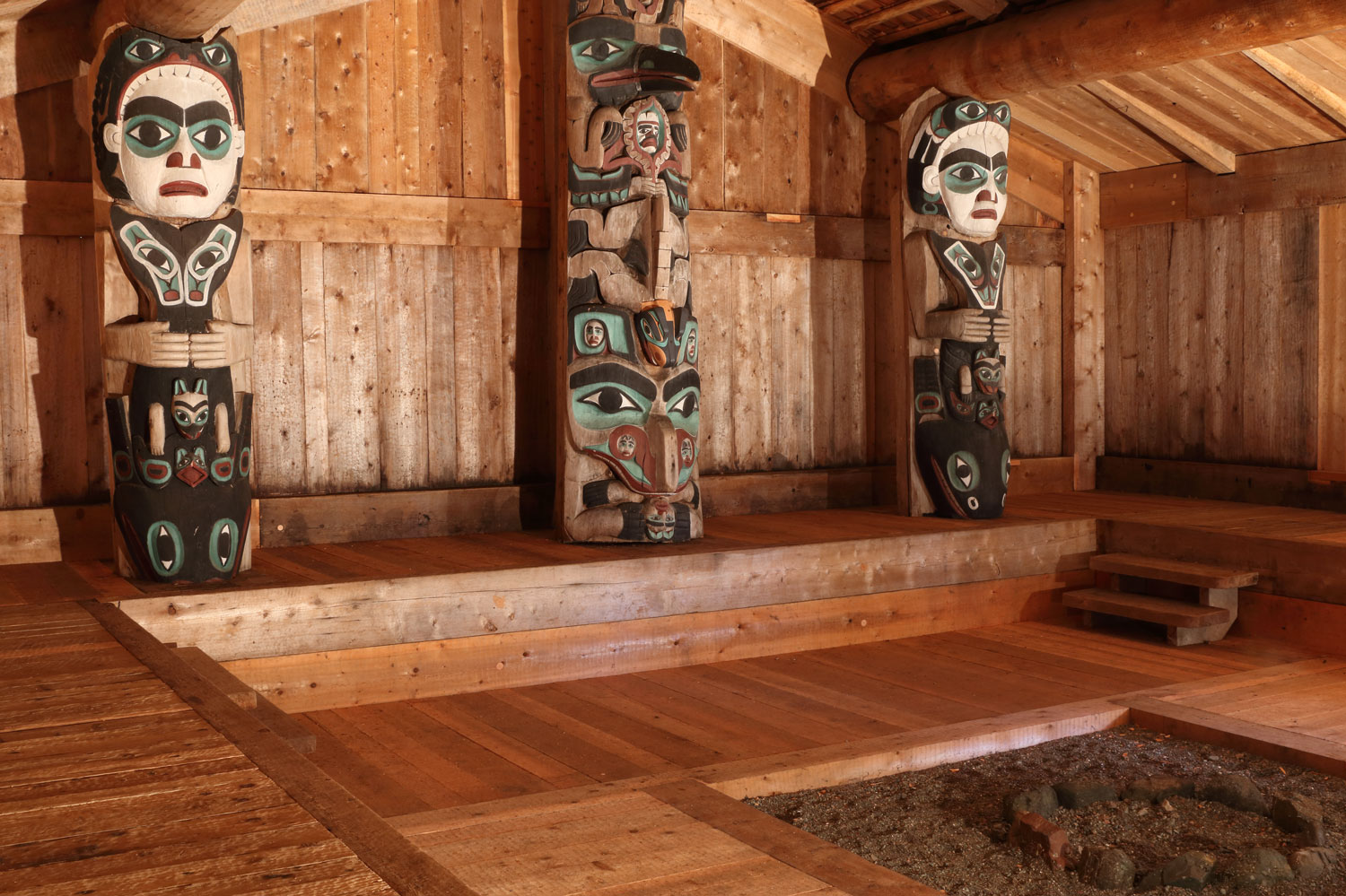 Inside the clan house are the three original totems. 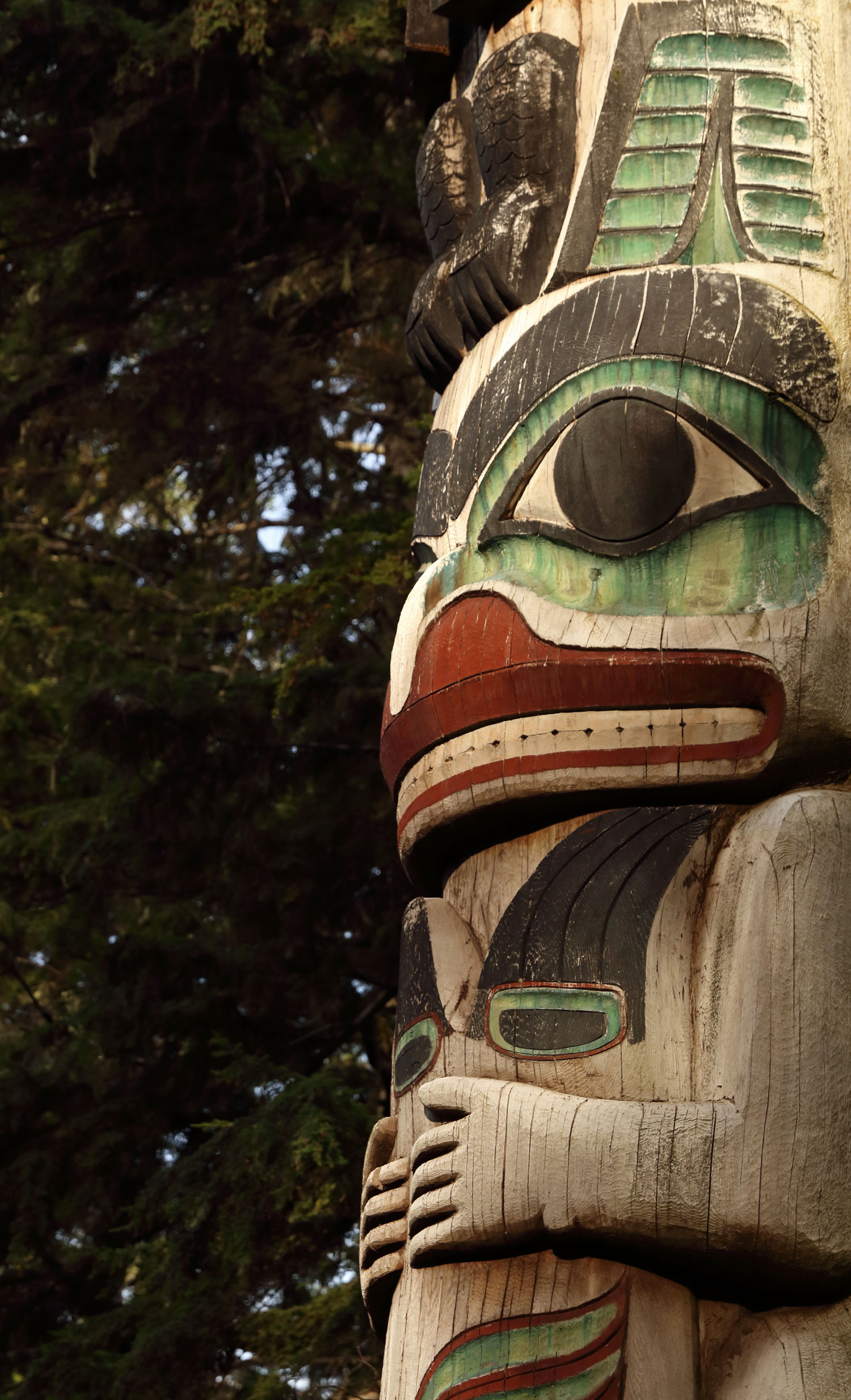 Pathways near the Whale House lead to tall totem poles tucked among the trees. They represent stories and history. These totems are showing signs of age, though. Insect damage has caused parts of the totems to break off, and small trees have taken root on the poles. Impermanence is part of the nature of totem poles, and new Haida totems are being carved and erected. 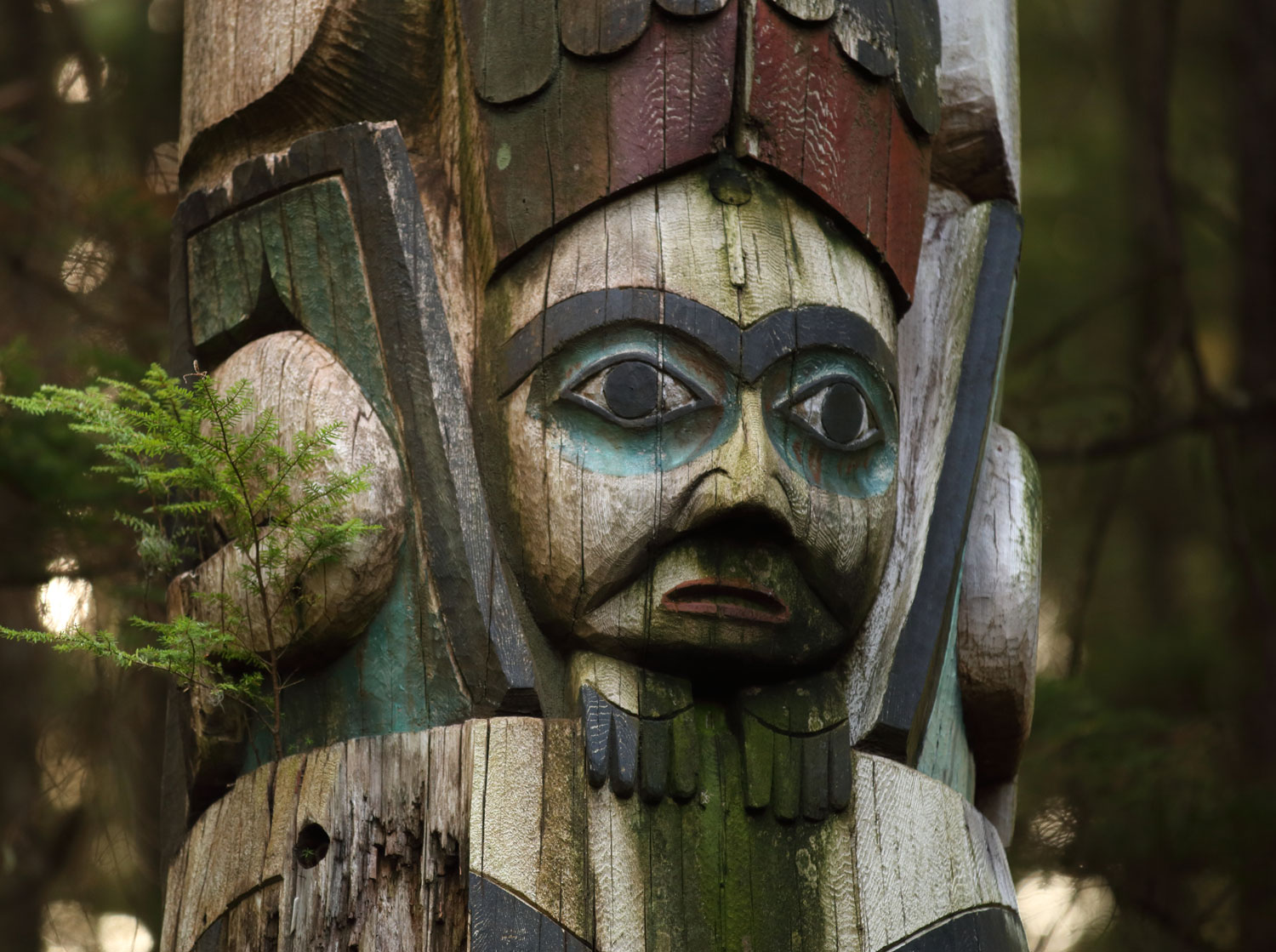 Some of the totems in the park are showing signs of age. New totems are being carved at the carving shed in Kasaan.

The drumming and dancing continues as I walk the sun-dappled trail back to Kasaan. Where the trail opens to the village there is a long totem carving shed. Inside the building carvers are transforming a massive cedar log into an intricate new totem pole. I was welcomed with smiles and the carvers were happy to share information about their work. Through the summer visitors can see carving demonstrations daily and learn carving techniques every Friday.

In the small community of Kasaan there is a gift store, but no grocery store. The Totem Trail Café next to the carving shed is open during summer for breakfast and lunch. Gas and diesel are available only from 2 to 2:30 p.m. on Tuesdays and Fridays. Smiles and friendly greetings from residents are available in Kasaan every day, and make the most fulfilling reason to visit. While you are there stroll down Totem Trail and visit the Whale House and totem park. Maybe you’ll hear drumbeats and song echoing through the trees.

Tomorrow I will share more photos of Kasaan and the Whale House Rededication!